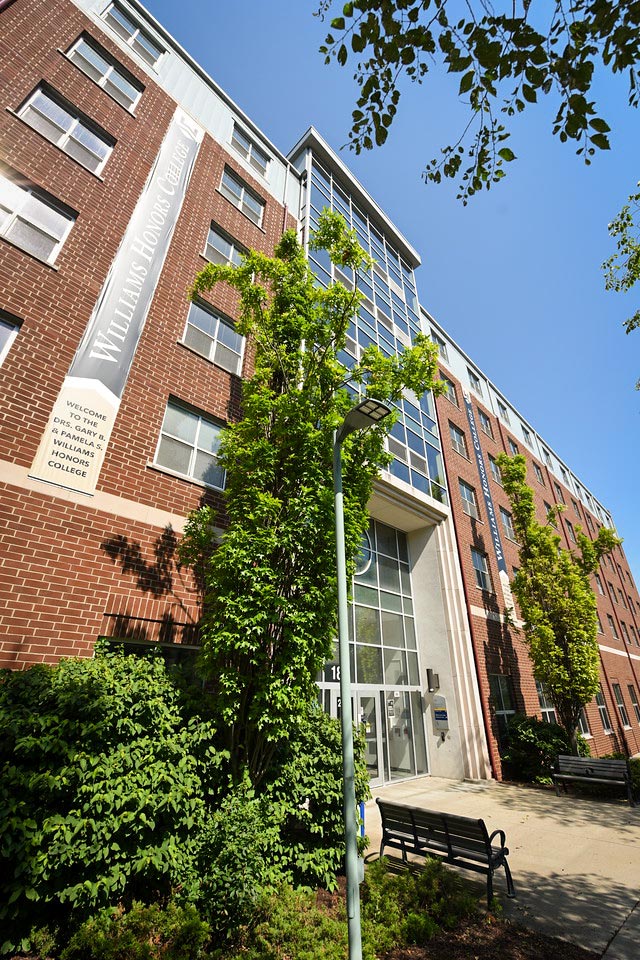 The Honors Complex, home of the Williams Honors College.

As part of The University of Akron’s sesqui­centennial celebration — honoring 150 years of our people, place and promises — we are hosting a “Celebration of Academic Excellence” to highlight the history and future of our colleges and academic disciplines.

Today we are looking at the history and achievements of the Honors Program, and later Honors College, at UA.

The University established its Honors Program, under the direction of Dr. Arno Lepke, in 1975. It offered many perquisites that honors students enjoy today: independent study; honors sections of courses; interdisciplinary seminars called Honors Colloquia; and a senior capstone project, supervised by a faculty sponsor, consisting of an original thesis or creative work.

Direction of the program passed to Dr. Robert Holland in 1988, and then to Dr. Dale Mugler, professor of applied mathematics and biomedical engineering, in 2000. That same year, Dr. Karyn Katz, professor of speech-language pathology and audiology, was named associate director.

The Honors College is born

Soon after their appointment, Mugler and Katz proposed the formation of a full-blown college, with an academic and residence hall — giving the program a place, the curriculum a community and honors students a home.

In 2005, the UA Board of Trustees approved the transformation of the Honors Program into the Honors College, naming Mugler its inaugural dean and Katz its associate dean. The Honors Complex, a six-story residence hall with an academic wing, at the center of campus, was completed the same year.

Over the next decade, the Honors College flourished, recruiting students who would go on to win Fulbright Scholarships and other awards. In 2014, two honors biomedical engineering students won the prestigious Barry Goldwater Scholarship, and another honors student received an honorable mention. According to UA’s then-chair of the biomedical engineering department, the odds of two students from the same university winning the scholarship in the same year were one-in-15 million.

The Honors College also hosted world-renowned guest speakers, such as Steve Wozniak, co-founder of Apple Inc., and Neil deGrasse Tyson, a popular astrophysicist and author. (A former college wrestler, Tyson amused his audience when he accepted a student’s playful challenge to wrestle on the floor of the common room in the Honors Complex.)

After Mugler’s retirement in 2015, Dr. Lakeesha Ransom became dean of the college and oversaw, the following year, the renaming of the Honors College as the Drs. Gary B. and Pamela S. Williams Honors College, in recognition of two distinguished alumni and longtime donors, whose cumulative commitment of more than $10 million has helped advance the expansion of the college.

In the last few years — under the direction of Interim Dean Dr. John Huss, followed by Acting Dean Dr. Dane Quinn — the Williams Honors College has reinforced its commitment to community, student research, interdisciplinary learning, leadership and education abroad. Recently, honors students have traveled to Guatemala to aid the poor and to Japan to learn about international lawyering.

Upon graduating, honors students join a proud family of more than 3,500 honors alumni, who are promoting excellence — and continuing to build and extend the UA honors community — throughout world.