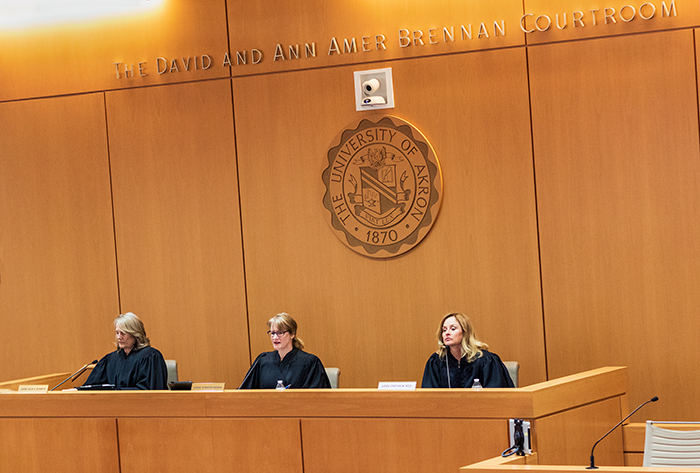 The University of Akron School of Law will host the U.S. Army Court of Criminal Appeals for an oral argument, followed by a question-and-answer session with students on Friday, September 24, from noon to 1:30 p.m. at the McDowell Law Center Brennan Courtroom.

The visit is part of the Court’s outreach program to provide law students with an opportunity to observe military court proceedings and get a glimpse of what it is like to be an officer in the Judge Advocate General’s (JAG) Corps. Students will mingle with the officers at a reception following the hearing.

This will be the first time the Court has visited a law school in Northeast Ohio. Law students at Cleveland State University and Case Western Reserve University are also invited to attend.

Judge Advocate General (JAG) Corps officers will argue a real-world case involving a soldier convicted of two specifications of assault and one specification of domestic violence. A military panel (jury) sentenced the appellant to be confined for 180 days and to be discharged from the Army with a bad-conduct discharge. The appellant raised multiple issues (assignments of error) before the Army Court of Criminal Appeals. The two issues the parties will argue are:

Law students and others may register for the event here. Parking and directions information will be provided.

JAG and the Army Court of Criminal Appeals

JAG Corps members include both commissioned and noncommissioned officers, as well as soldiers and civilians. They include lawyers, legal administrators, paralegals, and court reporters. Corps members are involved in military justice, operational law, and civil law. They may also provide legal services to soldiers and their families.

The Army Court of Criminal Appeals reviews courts-martial convictions. Tracing its history back to a 1920 amendment to the Articles of War, it is the Army’s highest court.