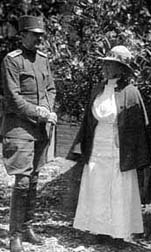 An 1887 alumna of Buchtel College, Mary Gladwin was the first woman awarded the Florence Nightingale Medal for Nursing. Gladwin served as a Red Cross nurse during the Spanish-American War, the Russo-Japanese War and World War I, when she worked under tense and dangerous circumstances in Serbia and elsewhere.

Among her varied professional activities in the United States, she played an important role in the Red Cross relief efforts in 1913 Dayton flood, and she served as superintendent of nurses in several large metropolitan hospitals.

In Akron, she organized and directed the George T. Perkins Visiting Nurses' Association and was a founder of the Summit County Red Cross Chapter.

The University of Akron honored this outstanding member of the nursing profession in 1920 by conferring upon her the Honorary Degree of Doctor of Laws.

In 1978, the University's Board of Trustees named the new building to house the School of Nursing, Mary E. Gladwin Hall, in tribute to this distinguished alumna and citizen of Akron.