Doctor, doctor, give me the news: What makes consumers choose?

Significant neural activation differences were observed when testing ads in areas of the brain associated with memory, uncertainty and information processing. (Yellow indicates the highest activity.)

Like doctors diagnosing an ailment, University of Akron marketing researchers have peeked into consumers’ brains to understand why some ads ring up quick sales while others don’t.

Their findings, accepted for publication in the peer-reviewed Journal of Business Research, are the first to link the financial success or failure of  “direct-response” ads seen on TV to areas of the brain associated with overcoming uncertainty, short-term memory and deep information processing.

The study is also noteworthy because of the unconventional way in which the researchers worked. Rather than follow the usual scientific method – proposing a theory about which marketing strategy will work, testing the theory and analyzing the data to predict its effectiveness – the UA team conducted “research in reverse.” The team started with known strategies and worked backward to determine which ones were or weren’t effective. That diagnostic approach to shaping a marketing strategy is similar to the way a physician gathers information and test results before reaching a conclusion. 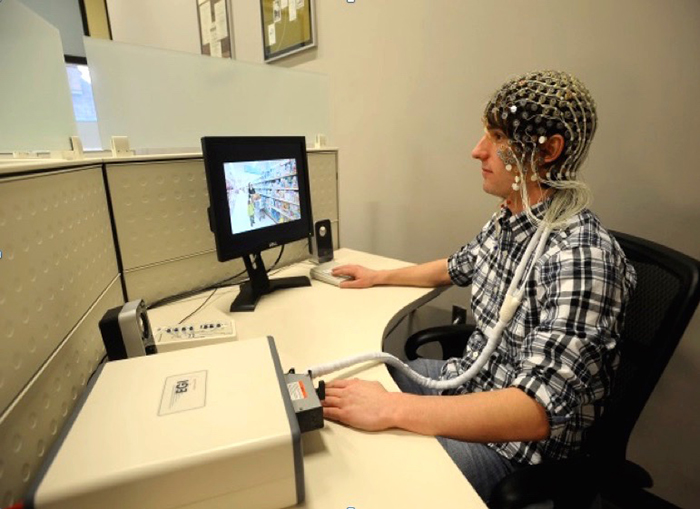 The study by Dr. Terry Daugherty, associate professor of marketing, and his colleagues is based on a real-world test of the ability of the sophisticated brain-monitoring tools in UA’s marketing research laboratory to correctly interpret consumers’ thought processes.

A direct-marketing company, skeptical of the research field called consumer neuroscience, posed a challenge to the UA researchers. The company provided six direct-response TV commercials for consumer products. The company wanted to know whether researchers could determine, based on the brain activity of test consumers watching the ads in the lab, which three products had sold well and which three had not.

Direct-response ads are familiar to TV viewers. They identify a problem, such as dry skin or leaky gutters, plug a relatively inexpensive product that can solve the problem, and urge consumers to buy immediately by calling a number on the screen. Operators are standing by.

Relying on the same advanced brain-monitoring technology that neuroscientists use, called dense-array electroencephalography, or dEEG, the marketing researchers correctly identified which ads had been consumer hits and which had not.

The researchers argue that their “reverse” method is better suited for neuromarketing research than the revered scientific method – an assertion they acknowledge amounts to academic heresy.