The University of Akron’s (UA) highly regarded design teams allow students at all levels to apply classroom theory to a major design project and compete nationally and internationally. Design teams provide students with the opportunity to dream it, design it, and build it, and make connections with team alumni and sponsors.

Our car teams, popular with mechanical engineering students (but open to all students across campus), provide students with the incredible opportunity to design a vehicle from scratch and compete against other collegiate teams. Most competitions happen in the summer, giving students a complete academic year to work on their cars. 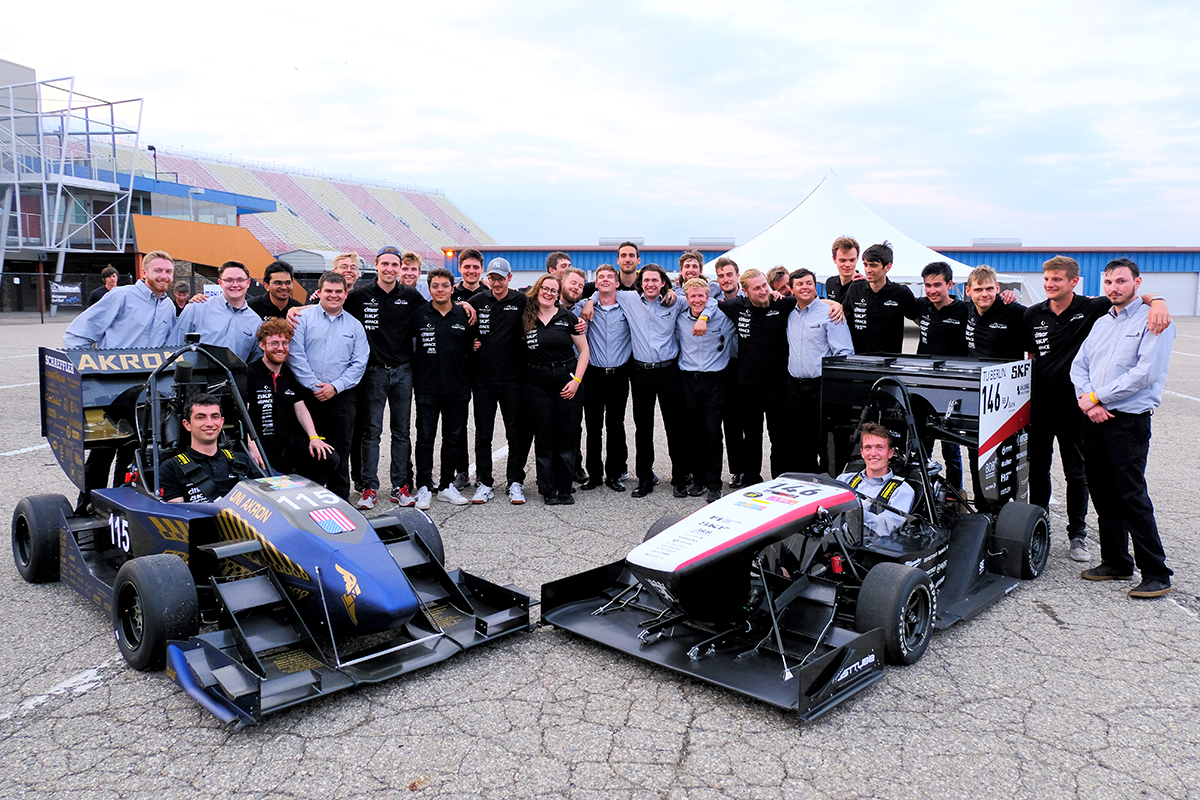 This May, 24 members of UA’s Zips Racing Formula Combustion team participated in the Formula SAE Michigan competition in Brooklyn, Michigan, one of the three US competitions hosted by the Society of Automotive Engineers (SAE).

Teams of university undergraduate and graduate students conceive, design, fabricate, develop, and compete with small, formula style vehicles. The competition requires performance demonstration of vehicles in a series of events, both off track and on track against the clock. Each event gives teams the chance to demonstrate their creativity and engineering skills in comparison to teams from other universities around the world.

This all resulted in the team placing eighth overall out of 100 teams!

“The biggest thing we had to overcome was an engine failure 10 days before competition and we had to rebuild a new race motor in seven days which is usually a process that takes two months,” says team captain and mechanical engineering student Ray Hilbert. “The team rallied and rebuilt the engine and rocked competition.”

The car weighed in at 375 pounds and is powered by a Yamaha single cylinder at 65 horsepower. The car (affectionally referred to as “Roxanne”) has a carbon fiber monocoque chassis with a steel rear subframe that was designed and built-in house. The tires were donated by Goodyear Tire & Rubber Company. An estimated 35,000 hours of combined team labor went into creating the finished project. 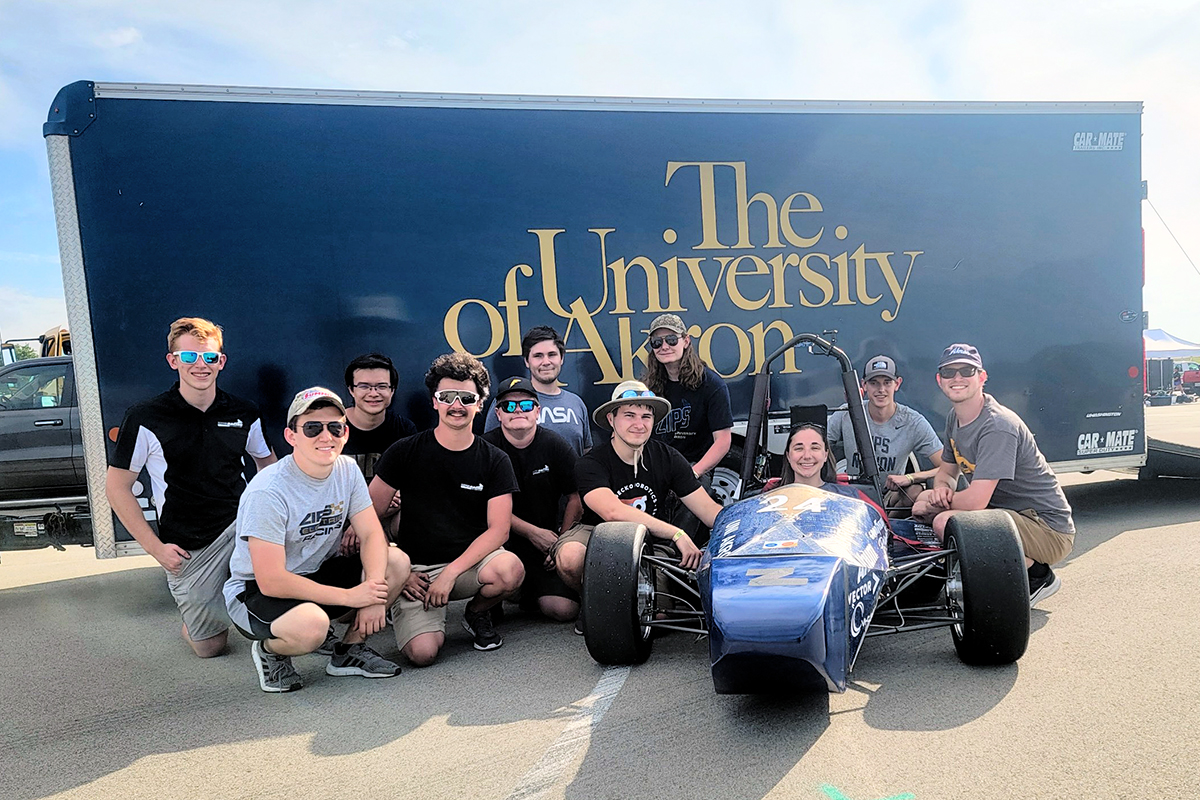 Four years after the debut of the team’s first electric car, Zips Electric continues to be a team to watch out for. The lean 11-person team successfully competed at the Pittsburgh Shootout on July 9. Though the team did not place, the car passed tech inspection, brakes test, and rain test on the first try —arguably the most nail-biting component of competition.

“The car ran well mechanically and electronically for all its laps completed, seven in total,” says the team’s captain, Dylan Matthews. Dylan is majoring in aerospace systems engineering.

The car weighed in at 451 pounds and was the lightest car in the team’s history, complete  with a 378V lithium-ion battery pack, the highest ever voltage for the team. It uses an Emrax 228 electric motor with 80kW of power/107 horsepower. The car features a steel tube space frame with fiberglass body panels. With upgrades to the dashboard, a more aesthetically pleasing design, the car also features an improved accumulator container and battery pack design to fit more batteries and last longer.

The team’s future plans including taking knowledge and improvements made this year to continue improving the car as well as recruit more members.

“For the 2022-2023 season, we are adding a full carbon aerodynamics package, improved tires and suspension, and more electronic improvements and are committed to producing the best electric car in Zips Racing history,” says Matthews. 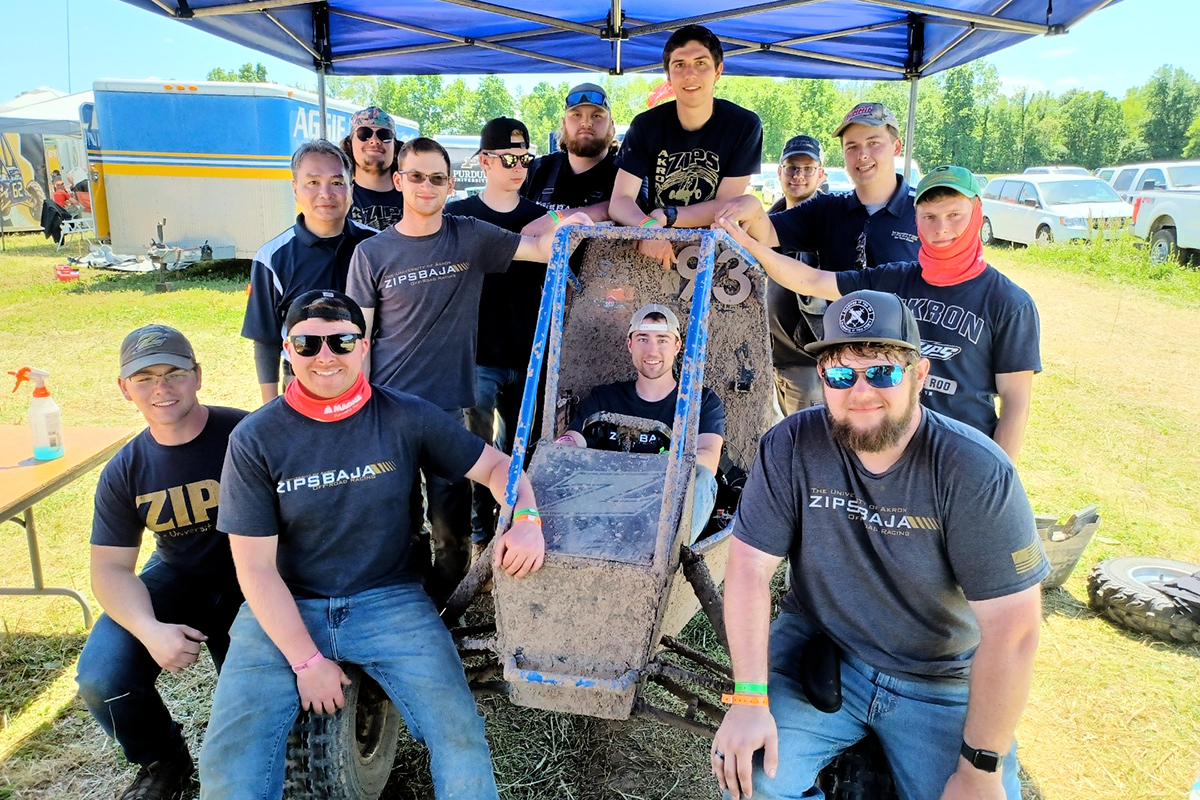 The student team that makes up Zips Baja traveled to the Formula SAE Rochester competition in June. Engineering students are tasked to design and build an off-road vehicle that will survive the severe punishment of rough terrain.

The Baja competition features undergraduate student teams from all over the country. This year 100 teams competed, including seven teams from Ohio. The Zips Baja team placed 32nd overall and fourth in maneuverability and was the #3 student team in Ohio!

“I am very proud of our team’s work especially since we were a new team competing against long established teams,” says team captain Trent Bolek. “Watch out for us next year. We are pursuing a 4WD car and a new engine. There are good things to come for Zips Baja.”

The twenty-five team members consisted of mostly mechanical engineering majors. Over the course of one academic year, the team designed, built, and competed with a single-seat, all-terrain, sporting vehicle. The final car weighed 310 pounds and was made from steel, aluminum, and carbon fiber. Team members design and manufacture about 80 percent of the components on the car.