Alexis Rossilli and Sophia Marcum, juniors in the Risk Management & Insurance (RMI) program in the University of Akron College of Business, have been selected as 2022 Anita Benedetti Student Involvement Program (ABSIP) Scholars by RIMS, the 10,000-member global risk and insurance management society. They are two of only 30 students in the United States and Canada to be named ABSIP Scholars.

“This is a huge accomplishment for Alexis and Sophia and a testament to the overall quality of our students and our program, and the hard work and dedication of Professor Jill Bisco, the program director, and Professor Jinjing Wang, our other primary RMI faculty member,” said James Thomson, associate dean and finance department chair.

“We are honored and proud of Alexis and Sophia,” Bisco said. “RIMS received many applications from qualified students, and the selection process is very competitive. Each school may nominate just two candidates. Having a single student selected is a huge honor for that student and the RMI program. While we have had Anita Benedetti Scholars in the past, this is the first time both of the students from Akron who applied were selected.” 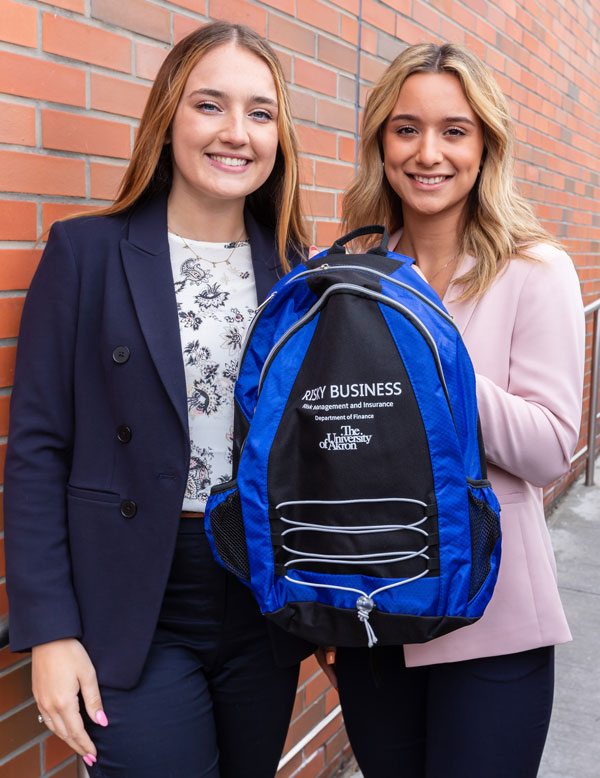 In addition to the recognition, the students were invited to attend the 2022 RIMS Annual Conference in San Francisco, April 9-13, funded by RIMS. At the conference, they received mentoring from their nominating professors, participated in career development, and networked with professionals in the field.

“Sophia and I applied to this not really thinking that we had a chance, because we knew it was such a big deal,” Rossilli said. “When we got the email, we immediately started texting each other. We just couldn’t believe it.”

“We weren’t going to apply, but Dr. Bisco really pushed us,” Marcum added. “I’m thankful to her for giving us these opportunities.”

What the committee liked

Bisco was honored that her two students were selected, but she wasn’t entirely surprised.

“The Benedetti Scholar judges are looking for more than just students who are great in the classroom. They want to see students who are really engaged, who take the initiative to get involved on campus and outside of campus,” she said. “Some students just don't do that. I think that's what really drew the selection committee to Sophia and Alexis.

”Sophia is one of the most engaged students that I know in the finance department,” Bisco continued. “She’s a double major in financial management and risk management & insurance with a minor in economics, and she’s president of both the Financial Management Association and our Gamma Iota Sigma chapter.”

“It was through Sophia and Gamma that Alexis got interested in the program,” Bisco continued. “She pretty quickly jumped in with both feet.”

Both Sophia and Alexis have really taken advantage of the available opportunities. Last fall, they attended both the regional and national Gamma Iota Sigma conferences and the Extreme Risk Takers Symposium in Atlanta for college students majoring in risk management and insurance. This past March, they both attended the Finance Leaders' Conference in New York for students interested in careers in finance.

“I tried a lot of things in college before I found risk management,” Rossilli said. “I started out in civil engineering, then switched to marketing. I didn’t even know risk management was a thing. But the more I learned about it, the more I began to feel this was something I could see myself doing. I like that it’s a field with financial stability, that is people oriented, and where I feel like I’ll be helping somebody.”

Rossilli has an internship lined up for this spring and summer with National Interstate Insurance, a specialty property and casualty insurance company based in Richfield, Ohio.

As for Marcum, she came to college knowing she wanted to study finance. She was encouraged to join Gamma Iota Sigma, which is where she learned about the RMI program from Bisco.

“Dr. Bisco definitely made a huge impact,” Marcum said. “Hearing other students’ stories and then meeting professionals and attending some conferences led me to decide to do the double major.”