Ever wonder why paint peels off the wall during summer’s high humidity? It’s the same reason that bandages separate from skin when we bathe or swim.

Interfacial water, as it’s known, forms a slippery and nonadhesive layer between the glue and the surface to which it is meant to stick, interfering with the formation of adhesive bonds between the two.

Overcoming the effects of interfacial water is one of the challenges facing developers of commercial adhesives. 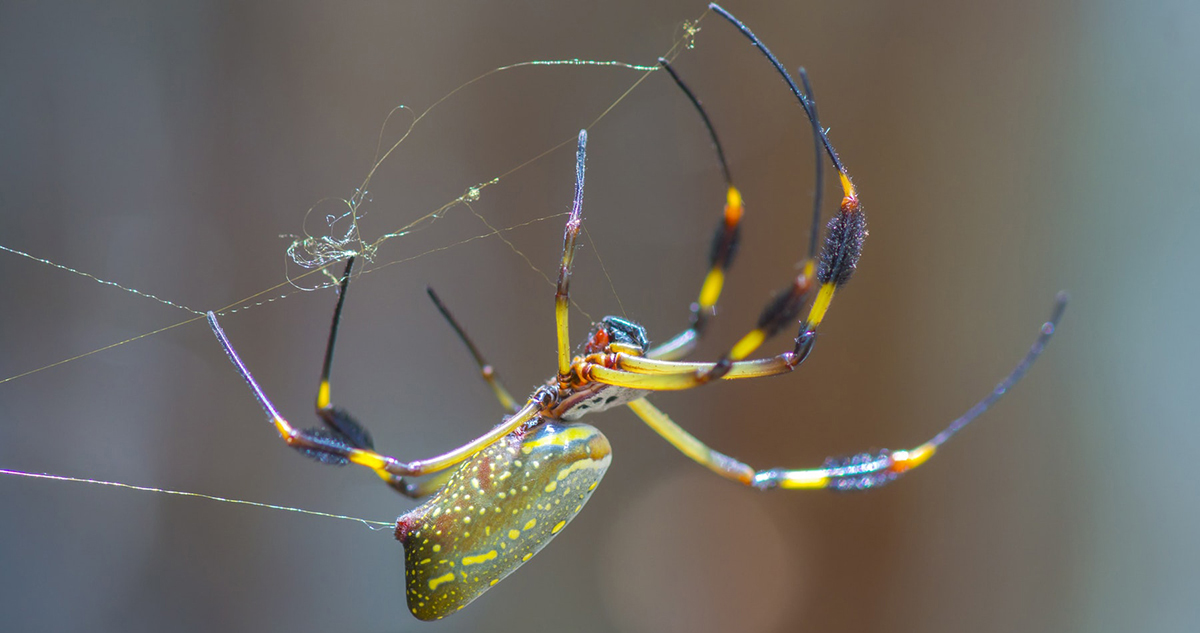 An orb spider, glue-maker extraordinaire, at work on a web.

To find a solution, researchers here at The University of Akron are looking to one of the strongest materials found in nature — spider silk.

The sticky glue that coats the silk threads of spider webs is a hydrogel, meaning it is full of water. One would think, then, that spiders would have difficulty catching prey, especially in humid conditions – but they do not. In fact, their sticky glue, which has been a subject of intensive research for years, is one of the most effective biological glues in all of nature.

So how is spider glue able to stick in highly humid conditions?

That question was the subject of investigation by UA graduate students Saranshu Singla, Gaurav Amarpuri and Nishad Dhopatkar, who have been working with Dr. Ali Dhinojwala, interim dean of the College of Polymer Science and Polymer Engineering, and Dr. Todd Blackledge, a professor of biology in the Integrated Bioscience program. Both professors are principal investigators in UA’s Biomimicry Research Innovation Center (BRIC), which specializes in emulating biological forms, processes, patterns and systems to solve technical challenges. 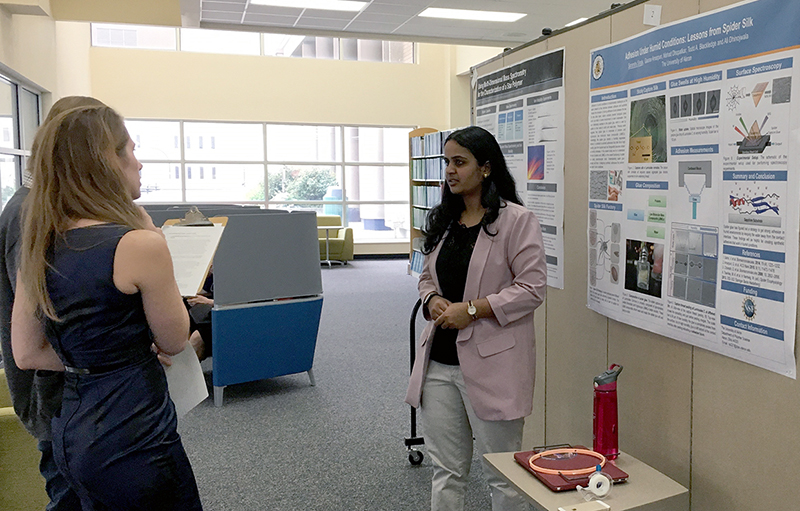 The team’s findings, which may provide the clue to developing stronger commercial adhesives, can be read in a paper recently published in the journal Nature Communications.

Singla and her colleagues set out to examine the secret behind the success of the common orb spider (Larinioides cornutus). How does it overcome the primary obstacle of achieving good adhesion in the humid conditions where water could be present between the glue and the target surface?

To investigate the processes involved, the team took orb spider glue, set it on sapphire substrate, then examined it using a combination of interface-sensitive spectroscopy and infrared spectroscopy.

Spider glue is made of three elements — two specialized glycoproteins, a collection of low molecular mass organic and inorganic compounds (LMMCs), and water. The LMMCs are hygroscopic (water-attracting), which keeps the glue soft and tacky to stick.

Singla and her team discovered that these glycoproteins act as primary binding agents to the surface. Glycoprotein-based glues have been identified in several other biological glues, such as fungi, algae, diatoms, sea stars, sticklebacks and English ivy.

But why doesn’t the water present in the spider glue interfere with the adhesive contact the way it does with most synthetic adhesives?

Singla and colleagues determined that it is the interaction of glycoproteins and LMMCs that governs the adhesive quality of the glue produced, with the respective proportions varying across species, thus optimizing adhesive strength to match the relative humidity of spider habitat.

“The hygroscopic compounds – known as water-absorbers – in spider glue play a previously unknown role in moving water away from the boundary, thereby preventing failure of spider glue at high humidity,” explained Singla.

The ability of the spider glue to overcome the problem of interfacial water by effectively absorbing it is the key finding of the research, and the one with perhaps the strongest prospect for commercial development.

“Imagine a paint that is guaranteed for life, come rain or shine,” Singla remarked.

All thanks to your friendly neighborhood spider glue.