“Over the years, I’ve noticed that a lot of students come to law school because they want to change the world,” said Brant Lee, professor of law and director of diversity and social justice initiatives at The University of Akron School of Law.

“The problem is, the first year of law school can beat that spirit out of you,” he explained. “These students often find that there is no time to discuss social justice aspects of the law in their classes. The career focus is on law firms and more traditional government lawyer jobs, and as a result, some of these students can get kind of lost. The school has always done a nice job of supporting students who are going into public service work, but there wasn’t a structure, a community.”

To provide a better experience for these students — and to expose other students to the public service realm — Akron Law brought together its existing diversity and social justice initiatives under Lee’s leadership in 2016 and charged him with taking it all to the next level.

Two years on, Lee still has plenty of items on his to-do list, but he is pleased with the progress to date. He points to three new initiatives:

In the Social Justice Lawyering Seminar and Public Policy Clinic, students examine the role of lawyers in social justice movements, while also working with nonprofits or government entities on law reform projects. This year, a team is working with the Urban League to explore the legal history of racial segregation in Akron.

In the new Social Justice Fellows program, participants explore opportunities to achieve their goals as law students and lawyers who will have an impact. Last spring the Fellows organized a civic engagement forum where local community organizations met with law students interested in volunteering. 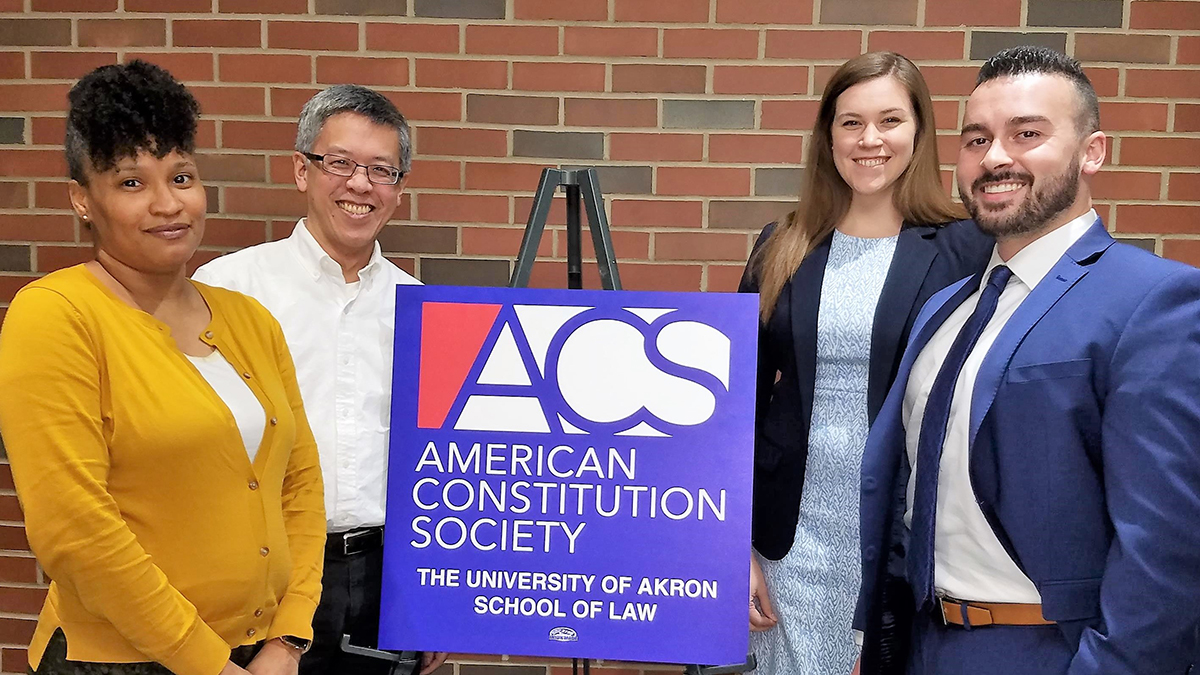 A new student chapter of the American Constitution Society (ACS), a progressive legal organization with chapters in 48 states, has quickly become one of the largest and most active law student organizations on campus, said Lee. It was recognized by ACS as the 2017-18 Rising Chapter of the Year.

“In addition to these initiatives, students interested in social justice can also take advantage of our nationally recognized Trial Advocacy programs, our Reentry Clinic, and our new and highly impactful Immigration Law & Human Rights Clinic,” Lee added. “I believe we are building one of the best social justice and public interest law programs around.”

The timing may be right for this elevated attention to social justice and public policy lawyering. A newly released survey from the Association of American Law Schools found students today largely are choosing law school for public-spirited reasons.

“There is no better way to make a real difference in a democratic society than to become a lawyer,” says Akron Law Dean Christopher (C.J.) Peters. “At Akron Law, we are proud to have one of the most exciting social justice and public interest law programs in the country, and we’re grateful for Prof. Lee’s leadership in this area.”

“If it weren’t for Prof. Lee, a lot of these things would go unrecognized,” said Deanna Thomas, a part-time student in her third year at Akron Law who is a Social Justice Fellow and a member of the Black Law Student Association trial team. “People would just go about their daily lives, just trying to get their law degree and not realizing that we could have an impact on all these areas, not just the legal area. I’m glad we have someone who is so persistent.”

Second-year student Cole Blakely was selected to be one of the first five 1L Social Justice Fellows in the fall of 2017. He said he hadn’t thought about public interest law before an internship with the city of Youngstown’s Community Initiative to Reduce Violence the summer before beginning law school inspired a newfound passion.

“One thing that the social justice program here at Akron does very well is provide a forum to share ideas and build support for other people’s passions and to encourage those individuals to keep doing what they’re doing,” said Blakely.

“It’s important to have that support because without it, it’s very easy to bury your head in the books and lose sight of some of the things you’re passionate about. Prof. Lee has shown me that you can do so much more with a law degree that you couldn’t do without it. That’s why it’s important to study hard and get your degree.”

Another second-year student who came to Akron Law with a predisposition for social justice advocacy is Amanda Wager.

A chemistry major, Wager was going to teach chemistry after graduation in 2014. “But around that time, I became aware of issues with public health related to fracking,” she said. She found a job with a nonprofit focused on environmental and consumer rights and worked there for three years before applying to law school.

“I knew when I came in that I wanted to do something where I would be an advocate and help people in some way,” Wager said. “When I learned about the new social justice seminar and clinic from some upper division students during my first semester, and I could not wait to take that course. The class above me really helped. I found a community within the first month.”