History is not a game. Or is it?

Video games are the latest mechanism to present historical material as entertainment, edging out films, books and tabletop board games. The more popular games, such as the “Call of Duty” and “Assassins Creed” series, present elements of history to players, such as the Western Allied forces storming the beaches of Normandy during World War II, or a scout traversing through Ancient Egypt and its magnificent architecture. But, like novels and films based on history, how true to the past are they? 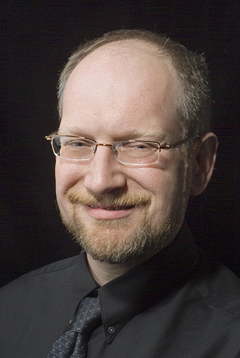 According to Dr. Martin Wainwright, chair of the Department of History at The University of Akron, it depends what you want to get out of the game.

Taking part in the past

“Video games are getting people to be curious about history, but no game can portray the past in full. They have to have a focus,” said Wainwright, whose recent textbook focuses on the topic of video games portraying the past. “Games can do things differently than books or movies. For one thing, you take part in them. That’s an empowering aspect about video games.”

Wainwright has written the first textbook that analyzes how well video games – from strategy to role playing – characterize yesteryear. The textbook, “Virtual History: How Videogames Portray the Past,” explores such themes as gender, culture and ethnicity, violence and oppression, economics and resource management, and ecology and environment.

As the introduction to Wainwright’s textbook reads, historiography (studying what historians say about a subject) “helps us understand what video game designers get wrong, what they get right, and where they intentionally or unintentionally take sides.”  It also reminds us that “video games can be a powerful tool for understanding history, but we have to appreciate how they present it in order to make effective use of them.”

Wainwright teaches the same themes expressed in his textbook in his course, “History and Video Games,” which he’s been instructing off and on since 2011. In class, his students analyze video games for accuracy, bias, structural limitations, and how they can be utilized as teaching tools to support student learning.

Some of the notable games featured in the textbook and course include “Empire: Total War,” “Civilization VI,” “Assassins Creed: Odyssey” and “Far Cry: Primal.”

“If a character is buying and selling commodities 300 years ago, I’m less concerned with whether the gameplay shows all of the commodities from that time period and more concerned whether the game developers mischaracterize how trade happened or how plantations were set up, and the underlying social and economic forces back then,” said Wainwright.

As he’s researched video games and history, Wainwright has become a bit of a gamer himself, trading in the tabletop games he played in high school for a console and controller.

“I’m not a big fan of the ‘Call of Duty’ series,” said Wainwright. “I think ‘Call of Duty’ grossly oversimplifies history and does not provide realistic historical content.”

As for games that acknowledge history and the ways of the past, Wainwright gives credit to series such as “Europa Universalis,” “Hearts of Iron” and “Crusader Kings,” all published by Paradox Interactive in Sweden.

“Those games are very detailed,” said Wainwright, adding they give the player the feel for architecture and what the world was like around them. “But I wouldn’t limit it to those games. They all have their limitations.”

One of those limitations can be how well the developers put the player in control.

“A good video game gets the player feeling like they’re somehow participating in the past and have to consider the types of decisions the ruler of a country would’ve had to consider back then,” said Wainwright. “If the game is dealing with the individual level, I like the idea of it being immersive: Does it give you the feeling you are actually walking through the streets of some ancient city? The more attention to detail games have, the better they are.”