College of Business Administration: Producing career-ready and connected graduates for more than 50 years

As part of The University of Akron’s sesquicentennial celebration — honoring 150 years of our people, place and promises — we are hosting a “Celebration of Academic Excellence” to highlight the history and future of our colleges and academic disciplines.

Today we are looking at the history and achievements of the College of Business Administration.

The entrepreneurial spirit of John R. Buchtel, humble farmer turned president of the Buckeye Mower and Reaper Company, has long animated the institution he founded, inspiring generations of industrious students.

That spirit lives on in The University of Akron’s College of Business Administration (CBA), which has received national, and even international, recognition for producing career-ready and connected graduates who go on to become competent and responsible business professionals. 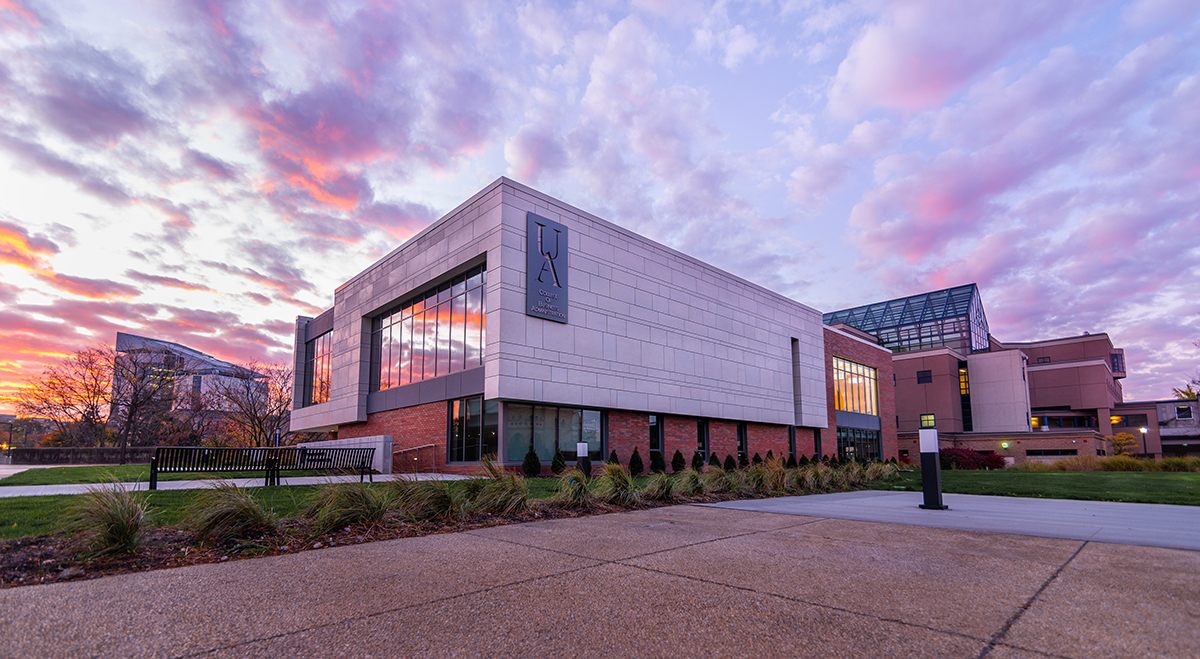 While the University began offering business courses as early as 1916, the CBA was officially established as a professional college at UA in 1953, with four departments: accounting, general business (which later separated into marketing and finance), industrial management and secretarial science.

The following year, the CBA became one of the first colleges in the country to use IBM Electric typewriters in all of its beginning typewriting courses. The college then continued to grow, introducing its first executive education program (for tire dealers) in 1954-55 and its MBA program in 1958.

In 1966, the CBA achieved accreditation from the Association to Advance Collegiate Schools of Business (AACSB), the hallmark of excellence in business education, and has been reaccredited ever since. Today, the CBA is among the approximately 1% of schools (offering business degrees) among thousands worldwide to hold dual AACSB accreditation in business and accounting. 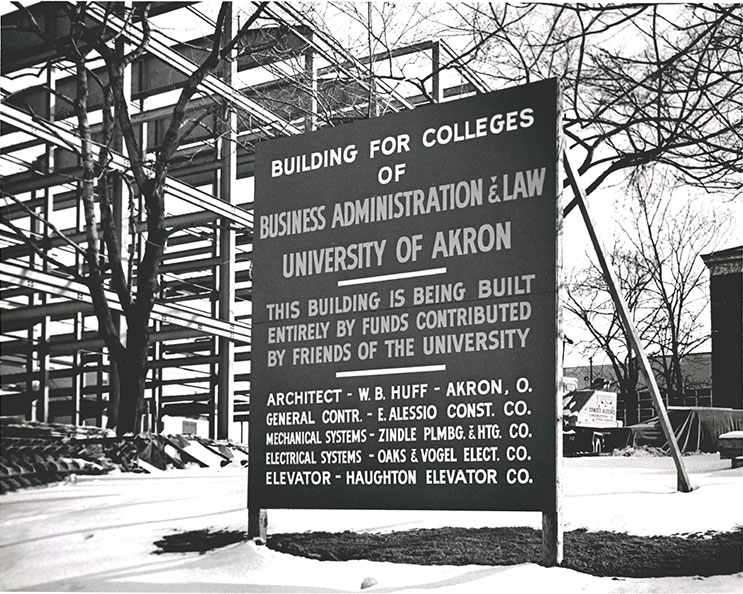 In the early 1970s, the college expanded its experiential learning opportunities for students. In 1972, the CBA was one of three institutions in the state, and 40 in the country, selected to participate in a Small Business Administration program, in which students provided consulting services to small businesses in the Akron area. The following year, the CBA introduced an accounting internship program with the IRS and Ohio Department of Taxation.

In 1988, 15 business and law students from the CBA and School of Law’s Joint Center for Taxation Studies Tax Clinic made history when they became the first college students in the country to testify before the U.S. Senate Finance Committee, revealing that millions of Americans were being unjustly penalized by the IRS because they did not understand the instructions on federal tax forms. As a result, the center was asked to work with the IRS in revising the tax forms. 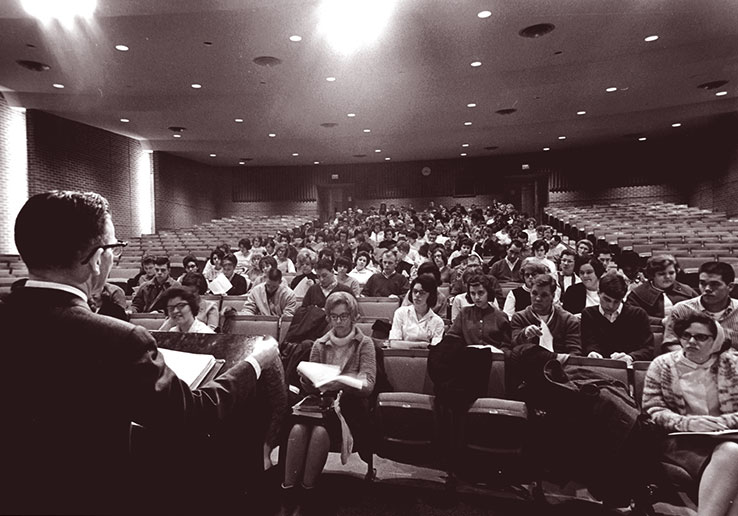 Here is the first class ever held in John S. Knight Auditorium in the Business Administration & Law Building (now Leigh Hall), on Feb. 1, 1965. That is Dr. Jack Watt, professor of education, at the podium.

The current CBA Building was completed and dedicated in the early 1990s, and the Ronald R. and Diane C. Fisher Institute for Professional Selling was established in 1992, making it the second university-based sales institute to be established in the world. The Fisher Institute would go on, in 2001, to be one of the seven schools to co-found the University Sales Center Alliance (USCA), a consortium of sales centers dedicated to advancing the sales profession. Today, the Fisher Institute boasts one of the largest, if not the largest, university-based sales labs in the country.

In 1993, the college launched its Weekend MBA Program, which today exists as the popular Saturday Professional MBA Program. In recent years, the CBA’s general MBA program has been ranked among the best in the country, having been named a “Tier One” program by CEO Magazine (2018) and one of the best on-campus MBA programs by The Princeton Review (2020). 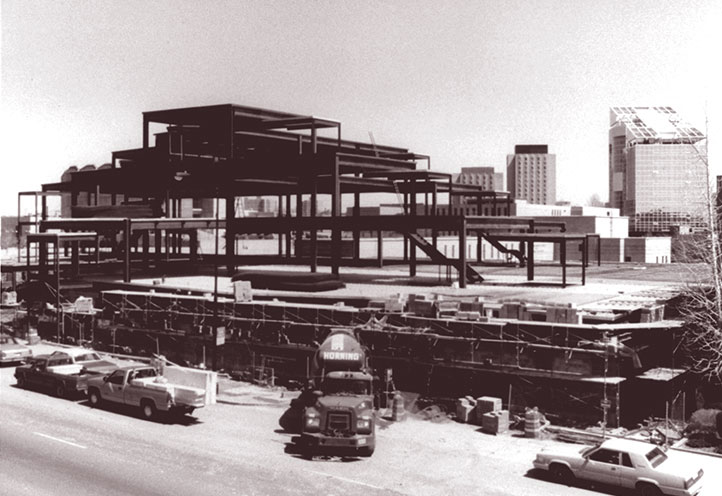 The current College of Business Administration Building is seen here under construction, ca. 1991.

The CBA continued to expand through the turn of the century, establishing the William T. and Rita Fitzgerald Institute for Entrepreneurial Studies in 1995, the Institute for Global Business in 1996, and the Center for Information Technologies and eBusiness in 2000. Two years later, the CBA was ranked among the top 25 business schools in the nation by Entrepreneur magazine, and in 2004 the Gary L. and Karen S. Taylor Institute for Direct Marketing was established.

Through a gift from The J.M. Smucker Co., the Institute for Leadership Advancement was founded in 2012, offering leadership training to students of all majors, including global immersion experiences in Jamaica, Haiti and other countries. Recently, the institute sponsored a trip to Silicon Valley, in which students learned directly from leaders of the largest tech companies in the world.

Over the past five years, the CBA has further solidified its reputation for excellence. In 2016, it was ranked among the top 50 undergraduate business schools at public universities by Bloomberg Businessweek. In 2019, the college’s Financial Planning Program was ranked 11th in the country by WealthManagement.com. The CBA was also named one of the top 100 undergraduate business schools by Poets&Quants in its best of 2020 rankings. 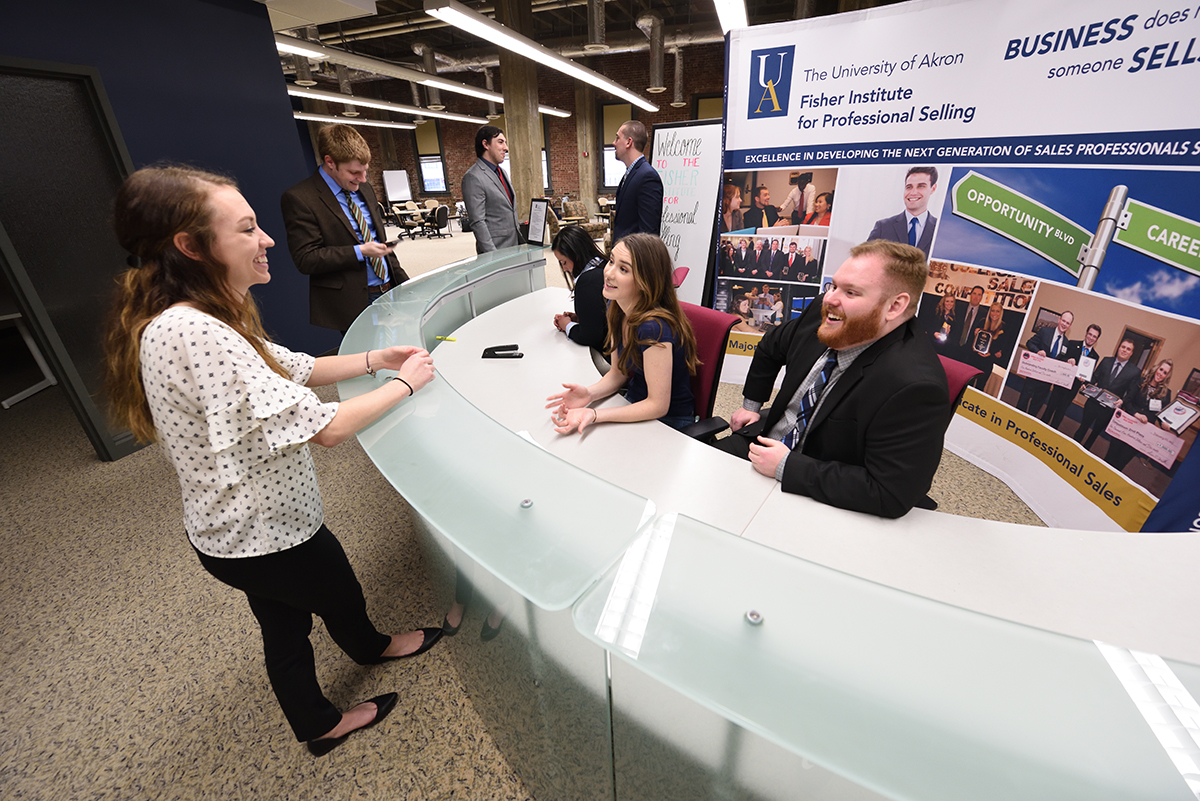 Last year, the college opened the doors to its 11,850-square-foot Anthony J. Alexander Professional Development Center, built with the support of 280 donors from the Northeast Ohio business community. The center was created in response to advice from the more than 270 business professionals from throughout the region who serve on the CBA’s Advancement Council and advisory boards.

All historic images are courtesy of Archival Services of University Libraries at The University of Akron.