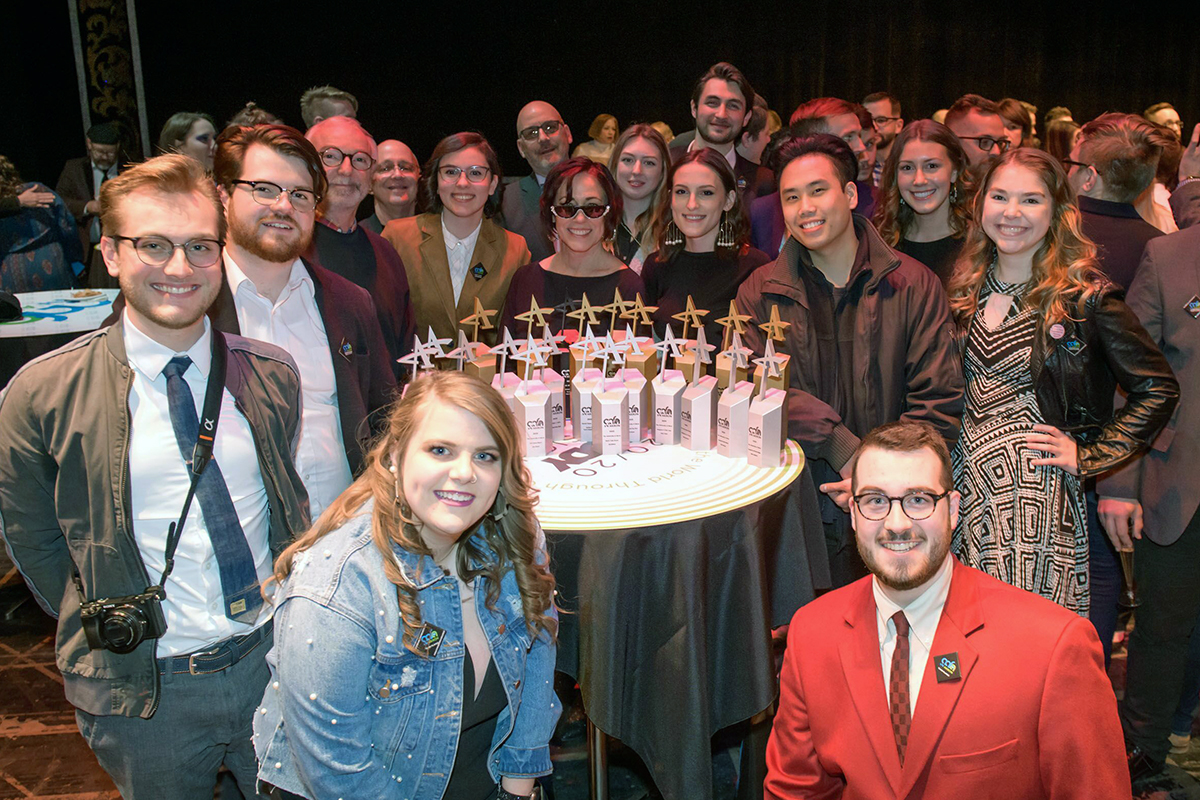 A very happy group of student and faculty winners with their awards at the 2020 American Advertising Awards.

Among the winners of AAF-Akron American Advertising Awards were 15 students, three faculty members and numerous alumni.

“As in years past, Myers School of Art really stood out,” says Melissa Olson ’10, serving her second year as president of AAF-Akron. “The judges continue to be very impressed by the caliber of work coming out of all the area colleges, but especially the way the students at The University of Akron can see projects from many angles, including the consideration of copywriting and marketing as important elements of campaigns. Professionals notice the level of skill Myers students are taking with them into the workplace as they leave the classroom.”

Maria Groom won the Student Best of Show for a second year for her Integrated Brand Identity Campaign “Tea Dude” done at UA, which also earned a Gold Student ADDY. Additionally, Groom earned a Silver Student ADDY for her Cross-Platform Integrated Campaign “Frozen Dead Guy Days.” Groom will graduate in May and has garnered a lot of interest from advertising agencies across the state and region due to her continued success. 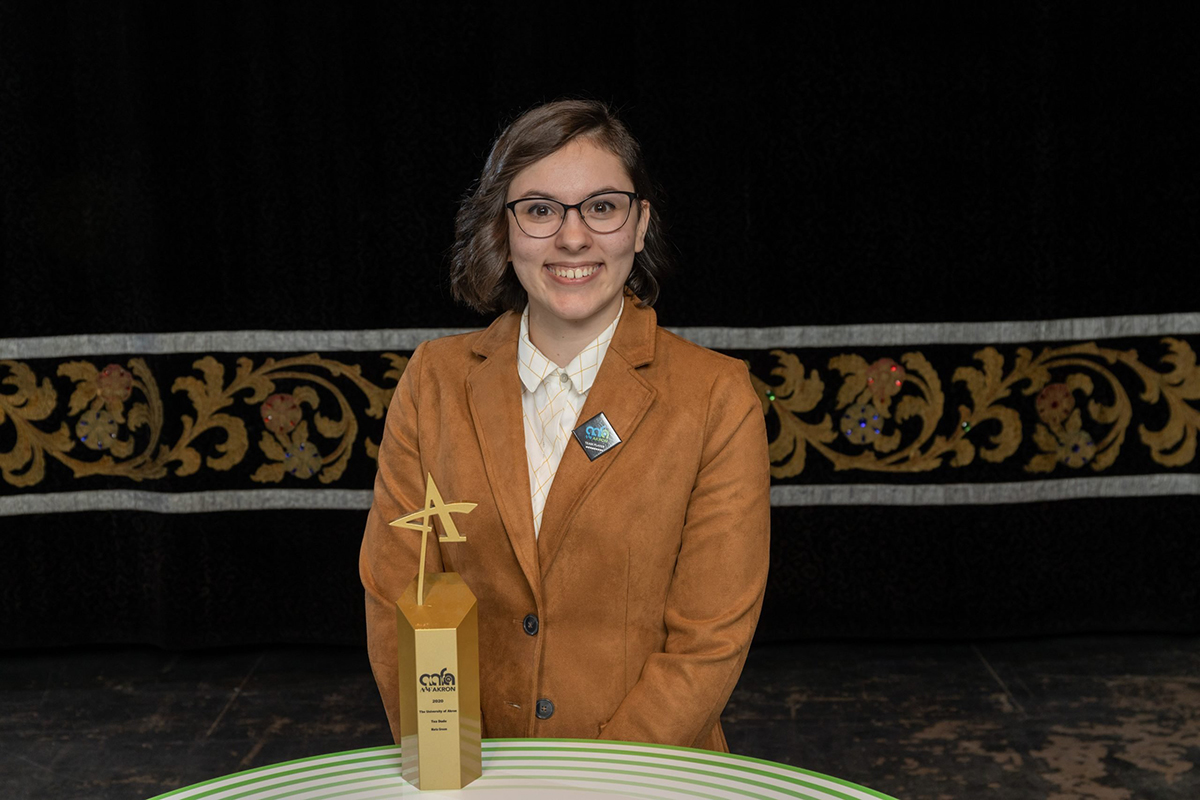 For a second year, Maria Groom won the Student Best of Show award.

Each year a scholarship is presented as part of the ceremonies. This year, senior graphic design major Abby Palombo was presented the $1,000 AGS Custom Graphics Scholarship.

The School of Art’s unique in-house student design studio, Design x 9, which provides a professional atmosphere, both in philosophy and physical space, won a professional Silver Award for a logo and T-shirt done for the 40th anniversary of UA’s Steel Drum Band.

The award-winning studio, now in its 24th year, is led by Janice Troutman, professor of art and director of the Myers School of Art, and John Morrison, associate professor and graphic design area coordinator. It offers graphic design students an opportunity to extend their training beyond the traditional classroom environment to work on real-world projects with deadlines, client meetings and budgets. 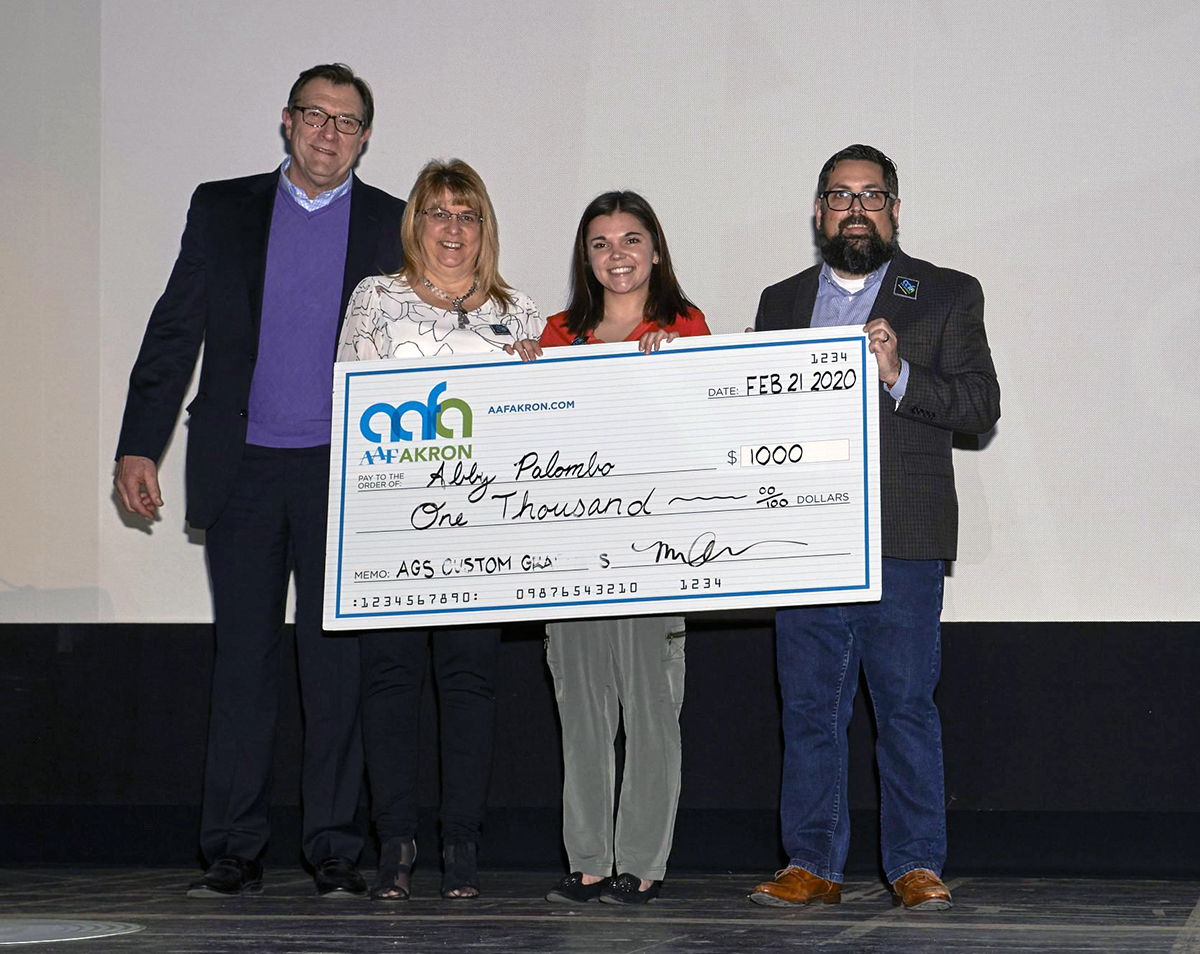 “It was another fantastic year for The University of Akron’s Graphic Design Program at the American Advertising Awards,” said Troutman, who was at the ceremony. “I am extremely proud to be part of the Myers School of Art’s talented faculty who lead the students to become skillful, creative professionals. Congratulations to the faculty, students and alumni.”

Here is the list of other student winners recognized for work done at UA: