The History of The University of Akron ROTC Program

Army Reserve Officers’ Training Corps at The University of Akron had its origins in the establishment of the Students’ Army Training Corps, which was activated at the then -- Municipal University of Akron on 1 October 1918. After the Armistice ending the Great War and a disastrous flu epidemic in November 1918, the S.A.T.C. was dissolved on campus. Through the efforts of prominent local businessmen and Dr. Parke Kolbe, the President of the University, the War Department authorized the establishment of an Infantry Reserve Officers’ Training Corps in December 1918.

Army ROTC was at first a voluntary course, and thanks to the efforts of Dr. Kolbe, ROTC became compulsory for the freshman and sophomore years beginning in fall of 1919. The earliest Professor of Military Science and Tactics (PMS) was Captain Adolph Unger, sent to Akron in March 1919.

Army ROTC was extremely popular in the 1920s and provided several graduates of local note who excelled in business and professional endeavors. The earliest commissioned, were sworn on 14 June 1922.

Training in the early years consisted of field fortifications, hippo logy, field sanitation, and map reading, as well as Infantry tactics. Since virtually every male student was required to participate in ROTC for at least two years, ROTC was a very prominent institution on campus.

During the Second World War, Army ROTC was joined by an aviation unit, which published its own newspaper, the Kiwi. The Air Force established a separate ROTC Detachment at The University of Akron in 1947, and the two branches have co-existed ever since. In the 1950s ROTC grew into a large organization along with the University. Not only hundreds of young men, but also dozens of women in the role of sponsors participated in the Army ROTC program on campus.

Women first entered the program as cadets in the fall of 1973, and have participated ever since. The late 1970's brought several "firsts" to the cadet battalion, including: The first female to command the cadet battalion, first to receive a Regular Army Appointment, first commissioned to graduate the nursing program and the first women to become Airborne and Air Assault qualified.

Beginning in 1985, ROTC students were required to wear uniforms to class. In 1986, the University approved the study of Military Science as an academic minor.

In the school year 1996/97, The University of Akron was selected as a Partnership in Nursing Education (PNE) School by Cadet Command. This increased the incentives and opportunities for the cadet battalion and the college of nursing.

In the past 90 odd years, over 1,700 students have been commissioned into service through the Army ROTC program at the University of Akron. Today's Corps of Cadets continue in the traditions and footsteps of their predecessors as leaders in our great Army. 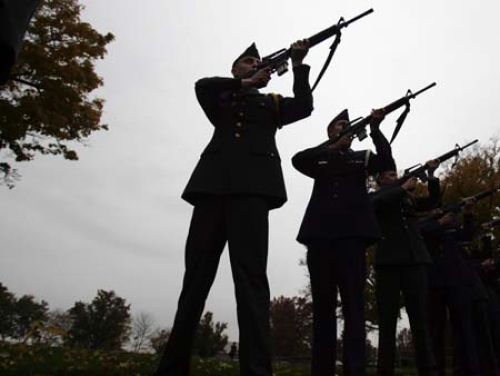 The University of Akron Army ROTC program is organized as a Cadet Battalion. The Battalion takes its lineage from a local unit formed here in Summit County. The Battalion is currently organized into a Battalion Headquarters and Staff, with three companies, Company A, B, and Company C. It's proud history is listed below.

In August of 1861, James A. Garfield was designated as a Colonel and chosen by governor William Dennison of Ohio to raise and serve as the commander of the 42nd Ohio Infantry Regiment. Col Garfield moved with his regiment from Northeastern Ohio to Columbus for final training and preparation to enter the Civil War. The Regimental nickname was designated as The Summit Rifles, a name that has stayed to this day.

The 42nd Ohio Infantry participated in the battles of Big Sandy, Shilo, Cumberland Gap, Chickasaw Bluffs, Vicksburg, and served in the siege and eventual surrender of Confederate General Canby in Mobile, Alabama. In total, the 42nd Regiment served in over 11 battles.

The 42nd Ohio Volunteer Infantry was deactivated by December 1864 after proud service. James A. Garfield went on to become the 20th President of the United States.