The University of Akron
Office of the President
About Dr. Miller Messages Strategic plan Multimedia Contact 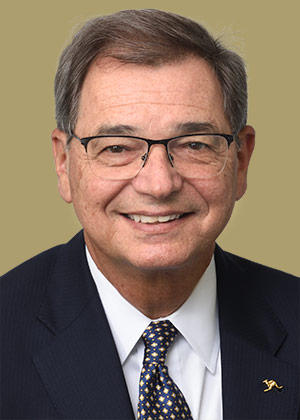 Miller has served as an institutional leader and consensus builder at public universities in several regions of the country. He has continued to solidify this reputation as president of UA. He began to lead the University at a critical time in its history, addressing many important needs. He immediately undertook an academic redesign, filled critical open positions with strong leaders, and aggressively tackled the budget issues that had been plaguing the institution for a decade. While celebrating the University’s sesquicentennial, he launched an inclusive, campus-wide strategic planning process to reinvest in the University’s areas of strength, create new programs and opportunities to earn degrees, and chart a path toward a new era of growth and prosperity. In doing so, he reaffirmed the University’s reputation as a leading public urban research university, dedicated to fulfilling its long-standing obligations to the city of Akron and its students.

Miller is known for his commitment to expanding opportunities for students to access higher education. During the COVID-19 pandemic, he swiftly moved the campus to a remote-learning format, streamlined student support services, and simplified admissions policies and procedures. He also has built relationships with the community and has led the campus to review its culture and processes related to diversity and inclusion.

He joined UA after serving as chancellor of the University of Wisconsin-Green Bay (2014-2019), where he led a campus-wide planning and visioning process called “Invent the Future of the University.” He also assembled a special planning and budget advisory group to help navigate the university at a time when schools were facing significant reductions in state funding. Under his leadership, the university established the Richard J. Resch School of Engineering; secured private funding and legislative approval for the STEM Innovation Center; partnered with a local technical college and public high schools to offer all Green Bay high school students access to 15 hours of college credit; reshaped its academic program which included gaining state approval for 22 new degree programs; and eliminated its structural deficit.

Before that, Miller was chancellor at the University of North Carolina Wilmington (2011-2014), where he developed the Center for Innovation and Entrepreneurship; oversaw the university’s launch of an innovative online nursing program; and opened a $30-million marine biotechnology business development and research building. Miller was one of three chancellors to join the Board of Governors in writing a system-wide strategic plan.

His leadership experience also includes service as provost and vice president for academic affairs and research at Wichita State University (2006-2011), and as dean of the College of the Pacific (arts and sciences) at the University of the Pacific (2002-2006).

In addition to more than two decades of senior higher-education leadership, Miller also has first-hand experience as a researcher and teacher. He was a faculty member at the the University of Mississippi, Weber State University, and Mississippi State University, where he co-authored a widely used textbook, “Ecology." As a researcher, Miller focused on arachnids and their environments. He received 25 grants and contracts, including awards from the National Science Foundation, the National Geographic Society and the United States Forest Service. Miller has presented his work at dozens of national and international meetings on four continents.

Miller holds a doctorate in biological sciences from Mississippi State University. He earned both a master’s and a bachelor’s degree in biology from the College of William and Mary.

He and his wife, Georgia Nix Miller, enjoy the arts and outdoor activities. They have three adult children and five grandchildren.