The University of Akron's third annual Interdisciplinary Symposium (UA-IS) allows undergraduate and graduate students to submit their scholarly and creative works as poster presentations. Students will also have the opportunity to network with faculty members and community partners.

See our symposium winners and all submissions now

UA-IS welcomes students from a range of disciplines including engineering, social science, life science, arts, business and the health professions. Students who produce scholarly and creative works of the highest quality are eligible to receive an award and cash prize. Presenting at UA-IS will be free for all UA students. 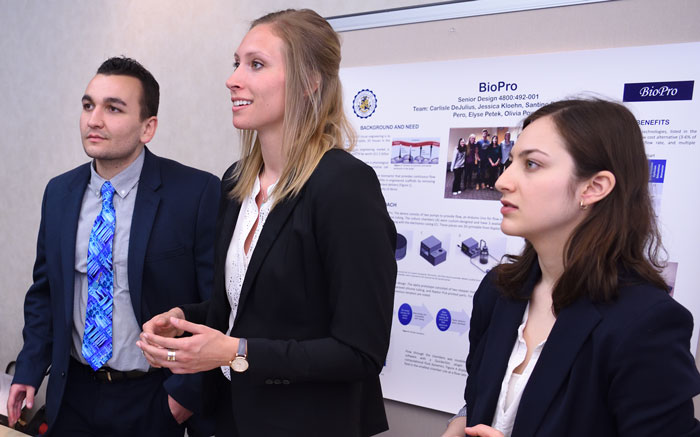 Thank you to our sponsors

UA-IS is sponsored and made possible by the generous support of:

Opportunity: UA-IS is looking for students to serve as representatives on the planning committee.

For the first annual Interdisciplinary Symposium (UA-IS) the Keynote Speech was given by Dr. Mark Taussig. You can read his speech below. Also see photos from the event on our facebook page below.

The organizing committee asked me to address the conference theme of inclusion and distinction through scholarship. I will do so but by reversing the order of the topics. I am going to talk about distinction as a largely individual accomplishment and inclusion as a largely collective idea. The two are related as the conference theme indicates. Distinction actually has two meanings. It can refer to outstanding scholarship- an individual accomplishment and it can refer to “distinctive”, innovative research- reflecting an inclusive research environment. Student research in an educational context such as UA, promotes scholarship, engages students, promotes personal growth and, develops gratifying personal relationships between mentors and students.

We know that students who have research experiences during their student careers are: more satisfied with the education they receive, have higher GPAs, more often go to Graduate School and, more often pursue academic or research careers. In short, student research is associated with student scholarly distinction. It is also associated with innovative research topics that are distinctive because they reflect student interests and perspectives.

I was reminded of the value of encouraging the distinctiveness of research topic choices while in an art museum recently. I was looking at an exhibit of French Impressionists. Their genre is one in which the personal choice of topic and the artistic techniques used are defining characteristics of the art form. The result of these personal choices are distinctive pieces of art explicitly notable for their unique perspectives and ability to convey aspects of the human experience.

You probably did something similar in choosing your own distinctive topic of research. Your scholarship is distinctive because it is a blend of you and your research topic. I view the subject of distinctive scholarship as relatively straightforward, flowing directly from the skills, talents, life experiences and creativity of student researchers.

In contrast, I think inclusion must be addressed in broader and more complex terms. I take inclusion to be about the sharing and consideration of multiple theoretical perspectives and research methods related to the way researchers address and debate scientific problems. Inclusion is a collective, group construct that conditions how individual researchers produce distinctive scholarship.

I will draw on two sub-disciplines within Sociology to consider this subject; The Sociology of Knowledge and the Sociology of Science. I want to explore what we might call “the social contexts of research” as they may affect the inclusion of a variety of research perspectives and what we know about the world. That is, as researchers, how is the choice of research topic determined in the context of the world that benefits from, utilizes or ignores the new knowledge we develop? And, does the conduct of research affect inclusivity or is it affected by the state of inclusivity in the general society?

Choices of research projects reflect institutional aims in each context (although there is overlap). The government funds much of the research conducted in educational institutions and some of what is conducted in corporate contexts. The governmental allocation of research funds often reflects political as well as scientific priorities. Think “cyber security” or “war on cancer” or “getting to the moon by the end of the decade” - JFK for those who don’t remember.

Corporate research priorities (and many of you will do research in corporate settings) are market oriented with profitability as a primary objective. The researcher is constrained to select research topics that are of interest to the corporation. And, sometimes this raises ethical concerns that may be complex to navigate. The recent crashes of the Boeing airliners has been partially related to the corporate priority of selling airplanes at the expense of adequate and complete safety research that might have delayed sales. What would you do if your employer insisted that you do research in ways that your gut tells you are unethical or dangerous? What would you do if you discovered a danger that your employer wanted you to overlook because sales would decrease if the findings were known (say, cigarettes or OxyContin)?

Drug safety and efficacy research is another area of corporate research where both ethical (research using vulnerable and powerless subject populations) and inclusive (or not) populations are issues of concern. Some drug companies use the populations of poor, underdeveloped countries to test new drugs because it is cheaper and it is less likely that research protocols will be strictly enforced, hastening approval and entry into the market. The “test” subjects in these studies are never inclusive (and rarely provided follow-up modern medical health care).

Research also takes place in a sociological context which gets us most directly to the issues related to inclusion and scholarship. To wit, research and researchers reflect the effects of power and privilege in the larger society. Thus, the connection between research and inclusion reflects the state of equality, equity, diversity and inclusion in the broader social system.

Now, consider this: Precision medicine use of genomic types - lack of genetic diversity. In a recent article it was noted that 78 percent of all individuals included in genomic studies of disease up to 2018 were of European descent, 10 percent were Asian, 2 percent African, 1 percent Hispanic and less than 1 percent for all others. It was pointed out that this biased selection of genomic populations means that we are less able to understand the genetics of many illnesses, as well as how diverse populations experience illness and react to treatment.

Medical research using women - lack of. In the early 1990s the National Institutes of Health documented the lack of inclusion of women in biomedical research. Even the first studies of the relationship between estrogen and heart disease used an exclusively male sample. The U.S. then passed legislation mandating that women be included in all federally funded biomedical studies and that results from such studies report on male-female differences. In 2014, reviews of publications since the early 1990s showed that in too many instances women were still excluded from studies or that findings by gender were not being published. The result is that we still don’t know as much about illness and disease and women as we need.

I argue that these examples are partially explained by the absence of diversity among researchers.

Just as French Impressionists created art that reflected their unique gaze, researchers select topics and ways to study them that are a function of who they are and how they perceive their field of research just like you probably did. So, it is no surprise that male medical researchers neglect to study female biology. And it is no surprise that leading edge and expensive genetic research, entirely conducted in the U.S and Europe, neglects variety in the world-wide human genome.

Demography is sometimes research destiny. There are, of course attempts to address this problem. UA has a robust Women in Engineering program. More than 1/2 of current medical students are women. The Ronald McNair Post baccalaureate Achievement Program aims to develop undergraduate under-represented students to become Ph.D. Students. Many of you here today reflect a growing inclusivity in the training of students. In fact, diversity in the awarding of doctoral degrees, for example, is increasing (though not yet nearly representative). The latest available data from the National Science Foundation survey of newly awarded doctoral degrees shows that the majority of doctorates awarded by U.S. universities in 2015 were to women. The number of degrees awarded to women rose from 9000 in 2005 to 17000 in 2015. The percentage varied between 70% in Education to 20% in Engineering. For African Americans, the number of degrees awarded rose from 1750 to 2250. African Americans received 15% of the doctorates in Education, 4% in Engineering and 2.5% in the physical sciences. For Hispanics, the number of degrees rose from 1450 to 2500. Hispanics received 8% of the doctorates in the Arts and Humanities, 7% of Engineering doctorates and 4% in Mathematics.

In this way, trends and developments in the larger social context can be reflected in trends and developments in the research community that ultimately affect the inclusiveness of research questions and methods. Your distinguished and distinctive research, an individual accomplishment, is conditioned by the larger institutional and social context that determines the inclusivity of your discipline and its receptivity to diversity in research topics, methods and personal difference.

There is reason for optimism as the numbers I just recited suggest. But there is also reason to pay continuing attention. Training a diverse research student body is not the same as placing talented researchers in important research positions. The lonely few women and minorities in such positions report discrimination in promotion, bias, harassment and downright hostility. There are still strong institutional and intellectual barriers to attaining an inclusive scientific community and an inclusive body of scientific knowledge. Overall, I think that inclusion in research depends on the diversity of researchers and the likelihood that diverse voices will be heard in the selection and pursuit of research topics. Institutions still need to be woke.

So, finally, let’s return to you, your mentor and the research experience. First, Congratulations on your research. You are going to grow as a scholar and as a person because of it. You are going to inject a distinctive perspective on a research problem and achieve distinction because of it. And, to the extent that you bring your own identity including; race, ethnicity, gender/sexual identity, social and economic background and life history to your research problems. You will help diversify the research enterprise making it more inclusive. Your good work exists within a social and institutional context that will shape that work and may affect its overall impact on our understanding of the world. The world only benefits from research that is of distinction and that is inclusive of perspectives and persons.

The University of Akron's first annual Interdisciplinary Symposium (UA-IS) was a huge success! We were amazed to see...