Ohio as a Microcosm of the Nation

Why is Ohio the premier battleground state in American politics?  Observers are already predicting, for 2012, that Ohio’s vote will be central in determining the winner of the presidential election and the upcoming senate election is also expected to be a close battle.

One explanation is that Ohio’s regional diversity is unlike any other state in the country. Many states, it is true, are a mixture of urban and rural areas. Geological features such as coasts, plains, and mountainous areas often divide states as well. Yet, Ohio is perhaps unique in that, while some of these factors are present, the existence of such regional diversity belies a simple explanation for Ohio’s complex political character. As observers and campaign strategists have long known, it is useful to think of the state as having five regions, what have been called the “Five Ohios.” Each region represents a unique collection of big cities, suburbs and rural areas, one or more media markets, and at least one major newspaper. Each region has a distinct political ethos and votes in a different fashion.

We are certainly not the first observers to note the existence of “Five Ohios”. We can, however, help to shed light on how distinct these regions are, and as with our other posts, we illuminate some of the causes and consequences of this regional distinctiveness. For this post, we will focus on how the regions behave in elections. 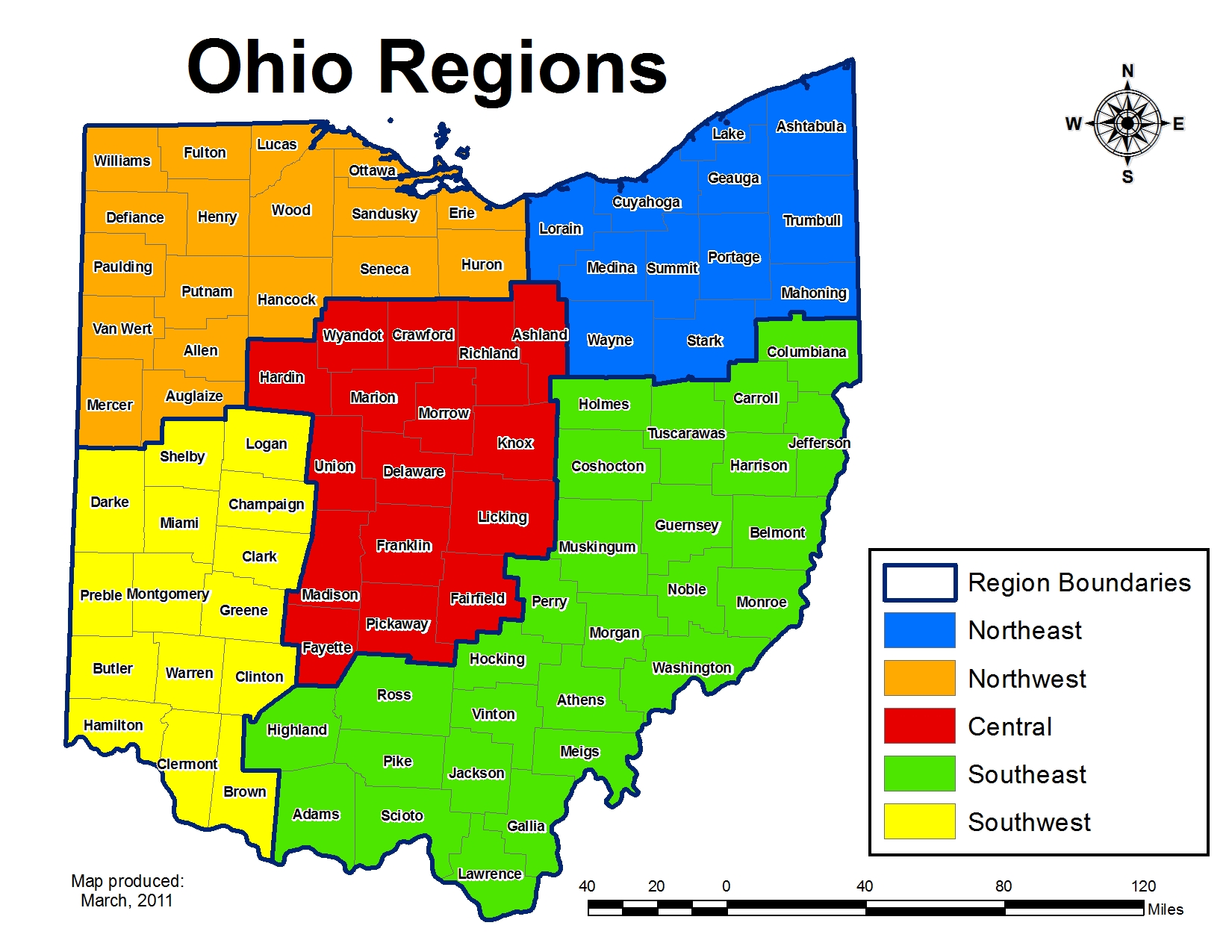 The five Ohios are   “Northeast,” “Northwest,” “Central,” “Southeast,” and “Southwest” Ohio. Figure 2.1 is a map of the boundaries of the counties within each region.  As Figure 2.1 shows, Northeast, Northwest, Central and Southwest Ohio form various kinds of rectangles in their respective “corners” of the states, loosely surrounding the dominant cities of each region. In contrast, Southeast Ohio covers a broad semi-circle along the .

The regions are quite distinct. For example, Southeast Ohio has the largest white population (95.9 percent) and Northeast Ohio has the smallest (81.4 percent). Professional/managerial occupations are more common in the “three C’s” regions and construction/manufacturing jobs are more common in the “Other Ohio” regions. Meanwhile, Northeast and Southeast Ohio tie for the largest proportion of older citizens, while has the fewest senior citizens. There are also important differences in religious affiliation with Southeast Ohio containing the most Evangelical Protestants and having the lowest; an opposite pattern holds for the Catholic population. There is also a large variation in population density across the regions.

Ohio’s regions match the regions of the country as a whole. For instance, resembles the country’s Northeast region in relative terms when it comes to the African-American population, population of European ethnicity, and the proportion of Catholics. In contrast, resembles the South in terms of poverty and the percentage of Evangelical Protestants. resembles the West in terms of professional/managerial occupations and college degrees. Meanwhile, Northwest and Southwest Ohio resemble the region as a whole.

These differences are very important in elections. Figure 2.2 shows the average Republican vote by county from 1980 to 2010. This gives a clear picture of the regional and county voting patterns smoothing out differences that arise during “wave” election years. In this three decade period, Northeast Ohio was the most Democratic of the Five Ohios, especially Cuyahoga, Trumbull, and Mahoning counties.  Overall, Republican statewide candidates won just 43 percent of the two-party vote in this region between 1980 and 2010. 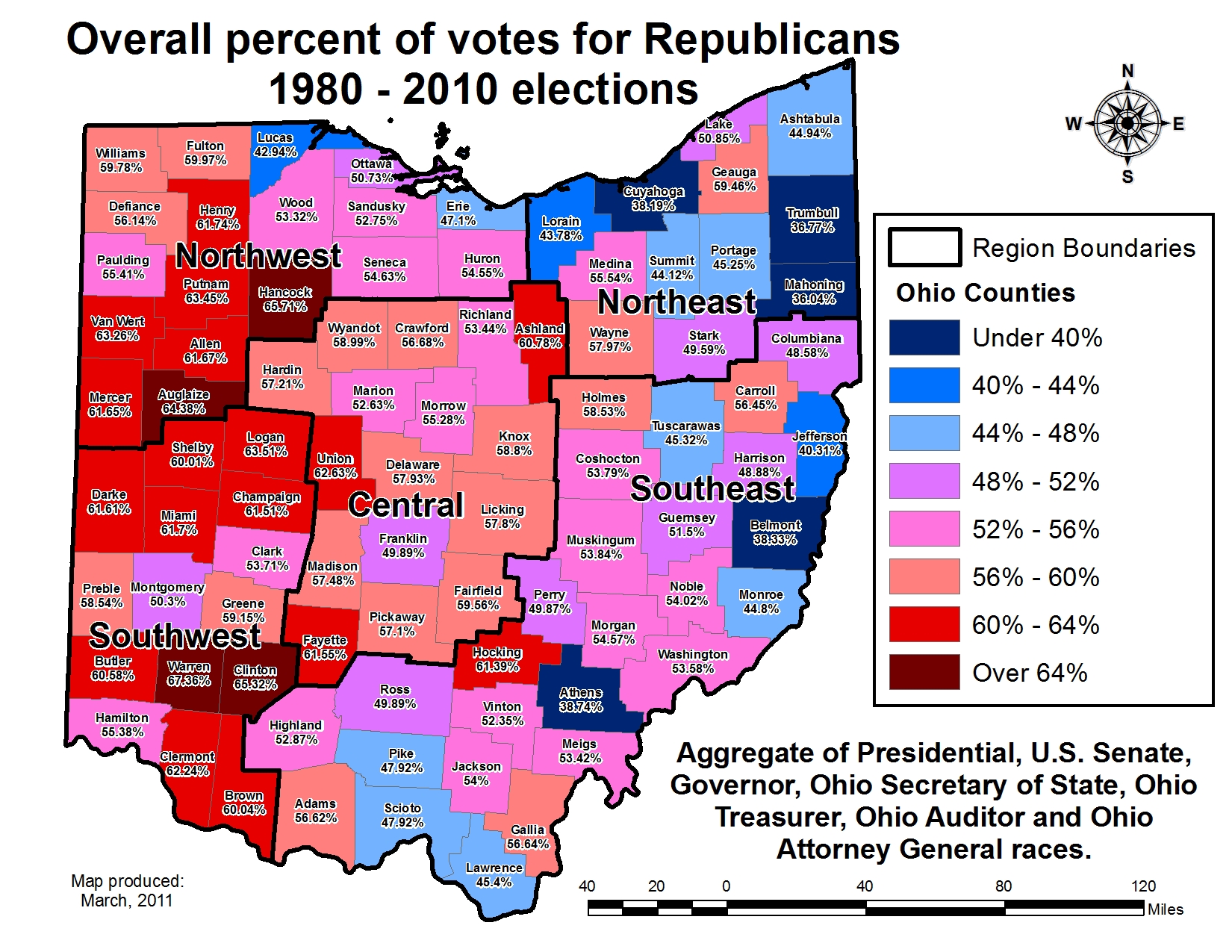 These patterns stretch back into history, remaining recognizable in both good Republican and good Democratic election years. Figure 2.3 illustrates this point by presenting the Republican presidential vote for the 1960, 1976, 2004 and 2008 presidential elections. In 1960, Richard Nixon defeated John Kennedy in the Buckeye state. In this election, Northeastern Ohio was the most Democratic region, and Southwest Ohio was the most Republican, followed closely by and the other regions. Overall, in the1976 election, when Jimmy Carter defeated Gerald Ford in , the Buckeye state was substantially more Democratic than in 1960. However, note that Northeast Ohio was the best Democratic region, followed by Southeast Ohio, with Southwest and Central Ohio still the best Republican regions. 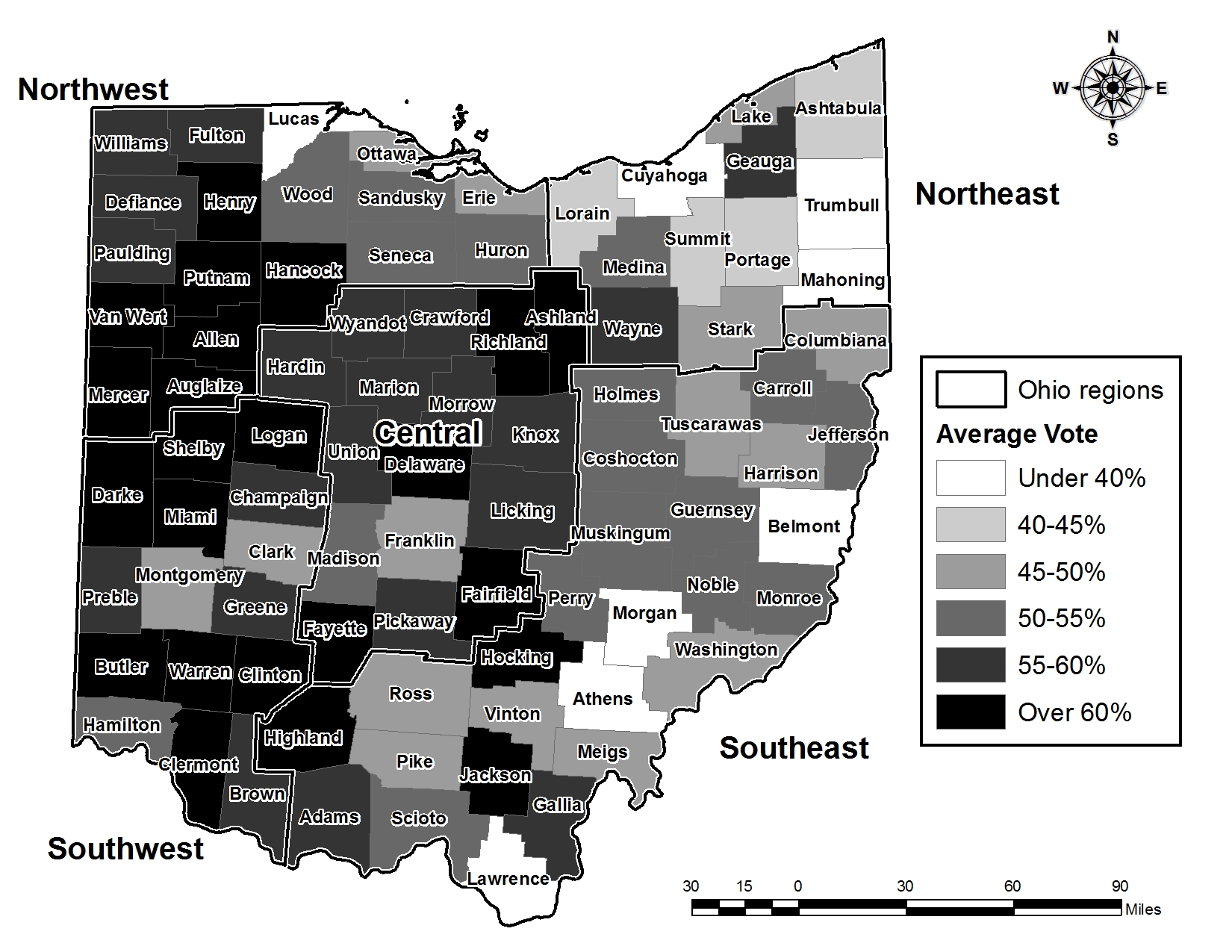 Finally, these patterns hold for statewide elections as well.  Figure 2.5 shows the inter-regional voting patterns across counties in a series of “dotplots” showing the distribution of county voting patterns in each region, ranging from Southwest Ohio (the most Republican region) to Northeast Ohio (the most Democratic region). Each entry is marked with an “R” or a “D” to show the partisan balance of the county; the size of the letter denotes the relative size of the county, with for instance, a large “D” denoting a more populous county and a small “D” denoting a county with a small population. These plots show the different tendencies of each region both in terms of overall partisanship as well as internal diversity and the relative importance of the counties to the overall vote.

Figure 2.4 shows the combined average by county for state elections from 1980-2008. These plots summarize the patterns we have described so far.

Figure 2.4: Intra-regional Diversity in the Five Ohios for Statewide Elections

Something of an opposite pattern occurred in Northeast Ohio, with a clustering of the counties toward the left (Democratic) side of the plot. Note the presence of the large counties on the Democratic side, especially , but also Mahoning, , and Trumbull. But there were also Republican counties in the region—smaller suburban and rural counties clustered toward the right side of the plot.

In these plots, shows the least variability in county voting patterns of any region in the state, with the counties clustered to the right. But note the single large county— —that is located right in the middle of the plot, hovering around 50 percent of the GOP vote. As noted above, has become increasingly Democratic over this period in federal and state elections. In this regard, looks more like the Southwest than the Northeast.

In partial contrast, resembles the Northeast. Several large counties are found on the left (Democratic) side of the plot, including . But the remainder of the counties—mostly small suburban and rural counties—clustered toward the right (Republican side) on the plot. The most intriguing pattern is in . When elections for a variety of offices are included (as opposed to just the presidential vote) eight counties gave a majority of their ballots to Democratic candidates—a figure that is a larger number of Democratic counties in . But note that these Democratic counties tend to be small and rural, much like the counties that cluster toward the right side of the plot. These patterns underlie the tendencies of the Northwest and Southeast to be swing regions in federal and state elections.

2006 and 2008 were banner years in Ohio, while 2010 saw the Buckeye state swinging sharply red. Did this electoral tsunami shake up the regional patterns we have described above. Overall, the results would indicate the answer is no. In Figure 2.5, we see a slight rightward shift in all of the counties but the basic pattern remains. One of the biggest differences is in the behavior of some of the larger urban counties outside of Northeast Ohio. Franklin county, for example, historically a red Republican county over the three decades we have analyzed, now is virtually an island among the smaller rural counties. In Southwest Ohio, Hamilton county barely hangs on as a ‘R’, even though smaller Montgomery county flipped to supporting Republican candidates compared to its long-term voting patterns. Yet both are similar to Franklin county, closely contested counties separated by a chasm from the other more Republican areas. In Appalachia and Northwest Ohio, the patterns are more similar to the long term trend, while in Northeast Ohio, there appears to have been a stronger rightward shift outside of the major metro areas.

Will these trends continue? The appearance of greater intra-regional polarization might be an artifact of a single election, but it also might be a sign of the national polarization that seems to define the current era of politics. That is, regional sorting might be occurring in Ohio such that red counties are getting redder and blue counties are becoming bluer. The answer to this question is far from clear.

Figure 2.5: Intra-regional Diversity in the Five Ohios for Statewide Elections 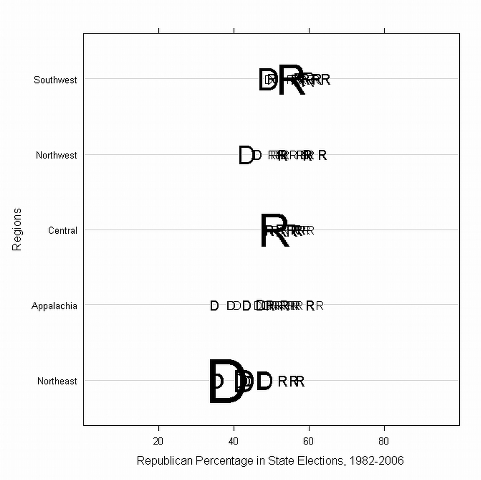 Recognition of the Five Ohios helps explain why Ohio is a bellwether, cyclical, and competitive state, especially in presidential elections. But the Five Ohios raises another question noted early in the chapter: why are these regions distinctive at the ballot box? Is it because of the composition of the regions or is it because of the context the regions provide for electoral politics? We explore these questions in the book and illuminate both the composition and contextual explanations for the political impact of region—and as part of the discussion, examine the impact of Ohio’s diverse demography on the vote.