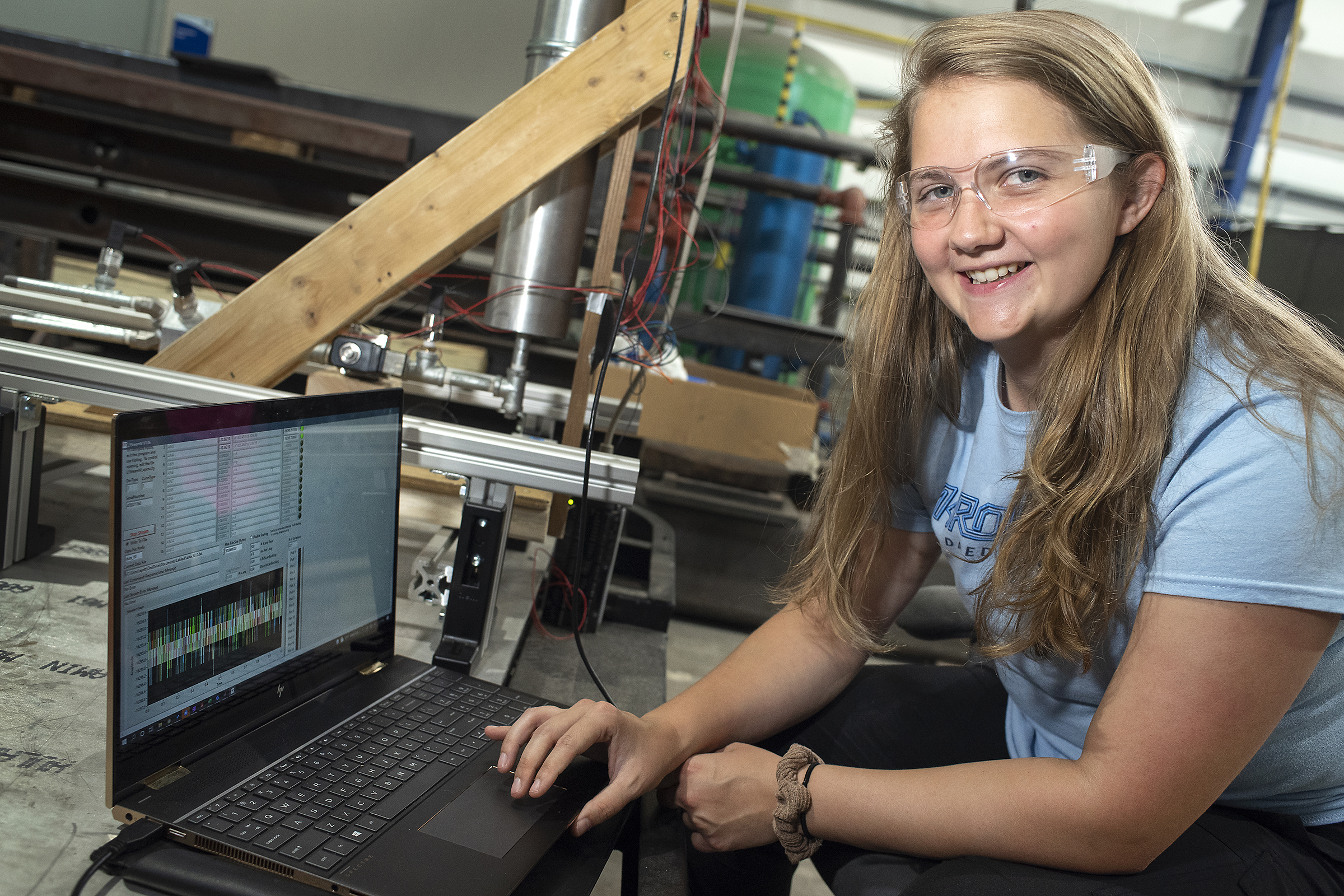 Members of The University of Akron’s rocketry team, the Akronauts, are no stranger to lofty goals and hard work. They are currently working on a rocket they will attempt to fly to 30,000 feet at the Spaceport America Cup in New Mexico. They are also aiming to reach the Von Kármán line, which is where the Earth’s atmosphere meets outer space, with one of their rockets by 2025. They will be partnering again with the I Promise School and LeBron James Family Foundation to teach rocketry classes to fifth grade students.

The team’s most ambitious undertaking to date is designing and building a liquid engine that they are hoping to debut during the 2023-2024 competition season. While there are other collegiate teams working on liquid engines, few have used one for a successful launch.

“What other time in our life are we going to have a bunch of aerospace students in one place who are willing to put in the time to achieve something no one has done at Akron?” says team president and aerospace engineering student, Emily Armbrust.

Not your typical engine

A liquid rocket engine consists of a fuel and an oxidizer, in liquid form, in separate tanks which are pressurized and pushed through an injector, regulating the flow of the propellants into a combustion chamber. Here, the two chemicals mix, ignite, and flow out of the nozzle, creating the takeoff thrust for the rocket. A liquid engine has more parts than a standard solid propellant engine so there is more to learn with the role each component plays and how they work together. Since the engine has a higher specific impulse (or - thrust per weight of propellant per second), the engine is designed to be easier to control. A unique feature is that a liquid rocket engine can be shut off once ignited, unlike solid rocket motors.

Because of the complexity of liquid engines, most collegiate rocket teams use solid propellants to propel the rocket. It is liquid engines that are, in Armbrust’s eyes, “the really cool and much harder way to launch a rocket.” These are more commonly used in industry rockets such NASA’s SLS Core Stage that is a part of Artemis 1 and SpaceX’s Falcon 9.

A liquid engine needs to be tested before it can be flown, and the construction of the test stand and engine are very expensive and labor intensive. No additional funding was needed to finance the engine because the Akronauts were able to initiate this project through a shift in team priorities as well as corporate donations. ITEM, Labjack, Fenix Fabrications, Alro Steel, and Clinton Aluminum provided in-kind donations of material and components which made this project possible. 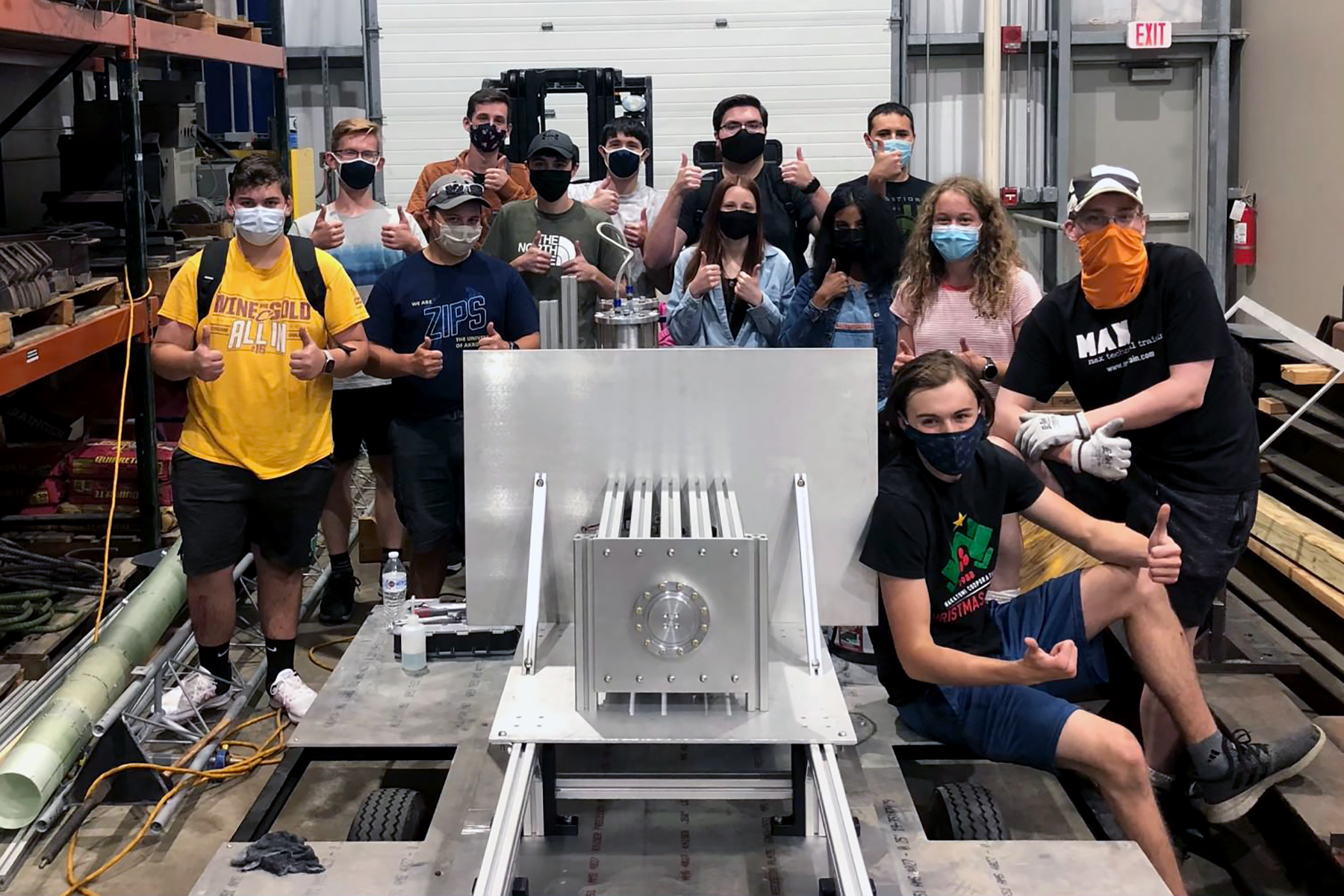 Members of the liquid engine sub-group standing next to their completed stand.

The 2021-2022 season has produced the largest team ever, with 64 members dedicated to the liquid engine alone. The liquid engine project is split into sub-groups including electronics, engine, feed system, manufacturing, safety and test stand. Members from all over the team contribute to these sub-groups and the team’s executive board oversees and pushes the progress of each group.

Members of the Akronauts are mostly undergraduate students pursuing bachelor’s degrees at The University of Akron. Some members have had co-op experiences at NASA’s Glenn Research Center, Johnson Space Center, Marshall Spaceflight Center, Masten Space Systems, MOOG, and Raytheon, among others. They have been exposed to the latest technology in rocket and engine design and want to apply their knowledge both in and outside of the classroom to a project of their own design.

“Building this engine is one of the team’s ultimate dreams. We all want this. This is our Space Race, and we are focused on the goal.” says team project manager, Dillon Petty. “This team is scrappy. At only 7 years old, we are looking to make our mark. In our eyes, our competitors are Ivy League schools like Stanford, Cal Poly, and MIT.”

Armbrust also points out how challenging this build is.

“This is true rocket science,” she says. “There is more modeling of the system to simulate the pressure drop through the feed lines, mixture ratio between the propellants, and overall outcome of the system. There are higher safety protocols due to the higher pressure in the tanks and lines, too. Since the team has increased in size so significantly, we can devote dedicated hours to this project and not be spread across other rocket projects. We can dig in, learn more, and figure this out together.”

Building the engine from scratch

Building a liquid engine isn’t easy, but the team was fortunate enough to rely on the plans of two previous members’ senior design project. They also researched published journal articles, used their experience from co-op, as well as leaned into the knowledge of the team’s far-reaching alumni network. Connections at Northrop Grumman, Virgin Galactic, SpaceX, Lockheed Martin, Raytheon, NASA and many other aerospace and space companies made answers to head-scratching questions within reach.

For example, early on in the design phase of the oxidizer tank, team members had trouble understanding why a passive vent designed to off-gas nitrous vapor was showing the tank would lose pressure in less than one minute. Using Discord to talk to team members and alumni, the team was able to work out a set of equations and realized the tank would lose pressure in about an hour. Together, a better solution was reached.

A heavy reliance on classroom subjects is critical in the engine build as well. Team members were knowledgeable in fluid mechanics, thermodynamics, statics and dynamics, materials analysis, heat transfer, data acquisition, aerospace manufacturing concepts and their machine shop training. The final engine will be made from stainless steel, graphite, phenolic and aluminum. 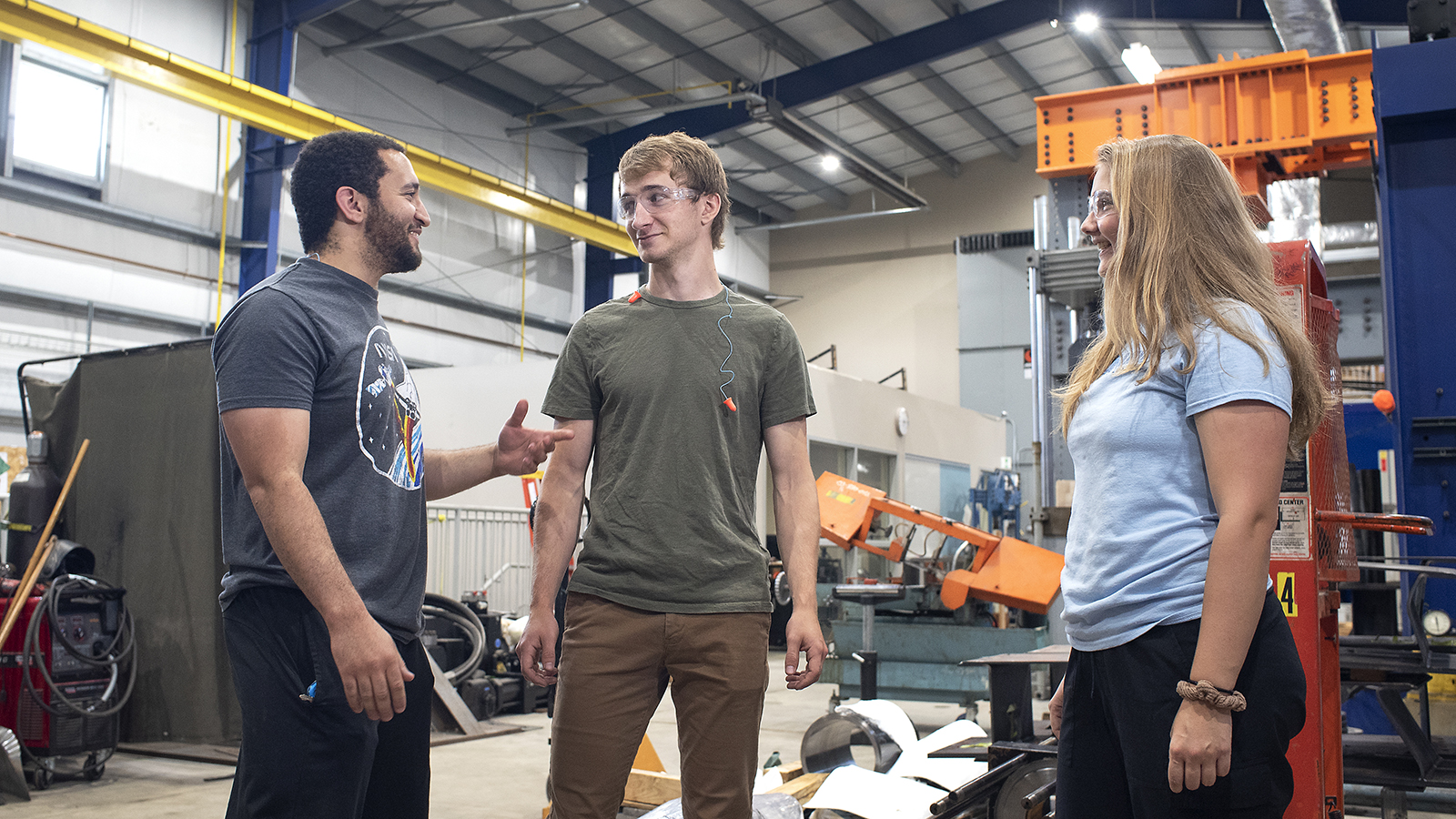 Jon Davis, Dillon Petty, and Emily Armbrust on campus in the Rocket Propulsion Lab working on their stand.

Building the engine would be an impressive accomplishment if done successfully, and Armbrust believes this would be very attractive to potential employers to hire someone with this experience.

Currently the Akronauts are in the high-pressure water testing phase of the project. Students have put in over 1,000 hours since the project began one year ago. This is on top of everything else they do for the team, their course load, and co-op or part-time jobs.

The end goal is to participate in the Dollar Per Foot Challenge, a competition for collegiate teams that use liquid propellants in their rocket. Hosted by Friends of Amateur Rocketry, this competition is held annually, and the winning team receives a cash sum in the amount of $1 for each foot the rocket climbs.

“Participating and placing in the Dollar Per Foot Challenge would be huge for us, but what we really want to do is create an environment for Akron students to gain space industry-related experience so that one day they land their dream job working in an innovative and competitive sector within aerospace,” says Armbrust.