Support from alumni and friends – like YOU – is vital to the Department of Geosciences at The University of Akron because your gift is an investment in students!

When you give to scholarships or field camp, you eliminate financial hardships, allowing students to focus on their studies and graduate on time. When you make an unrestricted gift to the department, you provide funds to update labs and enrich programming, ensuring today’s students continue to receive an outstanding academic experience.

In 2013, members of the Geosciences Club proposed a plan to restore the oft-painted, rock south of Crouse Hall to how it looked when it was presented as a gift from the Class of 1880, and to install a commemorative plaque with the history and geology of the rock. The project was led by Mark Dombroski, (B.S. Geophysics, 2014) and Lindsay Wasik (B.S. Geology, 2014). When we went to take a picture of it the next day, it had already been painted once again!

A Brief History of the "Spirit Rock" 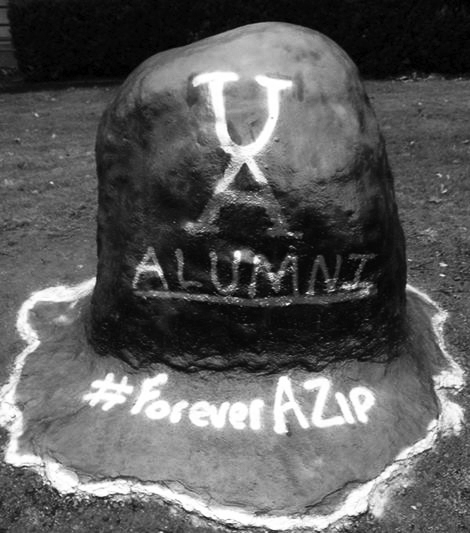 Buried beneath all the acrylic and latex is an 8-ton gray boulder that is 7 feet fall, 5 feet wide and 3-1/2 feet thick, containing 90 cubic feet of igneous rock known as syenite.

A fixture for more than 130 years, the stone is one of the oldest relics on campus.  Buchtel College, forerunner of UA, was only eight years old when the Class of 1880 went to great expense and effort to haul the landmark to the school's lawn.  The seniors wanted a stone to dwarf the Class of 1897's modest marker, a flat, 2-ton rock that, incidentally, still exists, albeit coated in paint, near "The Rock" outside Crouse Hall.

Scouring the countryside, the boys found a perfect specimen half-buried on the 115-acre Copley Road farm of Col. Simon Perkins, son of Akron's founder, Gen. Simon Perkins.  "It took several days to move the boulder to the hilltop campus. The city engineer didn't think that the town's bridges could withstand the weight, so the transport company had to shore up the structures before the rock could pass across.

Seniors dug a deep hole, partially filled with crushed rock and concrete, to deposit the boulder on campus. When the stone finally neared, the hole was missing! Pranksters in the Class of 1882 had "borrowed" a wooden building and placed it over the opening. The seniors scolded the pesky sophomores and quickly restored order.

Finally, the rock was "planted with impressive ceremonies" in the presence of "an immense assemblage" on May 13, 1880.

The rock, which was boldly engraved "1880," stood firm while the surrounding campus changed drastically. Buchtel College's main building burned down in 1899. Other landmarks were demolished for newer buildings as the renamed University of Akron enjoyed a surge in growth.  After eight decades, "The Rock" stood in the way of progress. While the foundation of Zook Hall was being dug in September 1961, a construction crew had to use a structural steel crane to move the 1880 rock about 30 yards to a spot just south of Knight Hall, later renamed Crouse Hall.  Dr. George W. Knepper, leader of the history department, and Vice President Leslie P. Hardy supervised the move.

The engraved year "1880" was still visible 50 years ago, but students would need an X-ray machine to find it today.

Campus artists have added thousands of layers of colorful paint since the 1960s, obscuring the credit that those long-ago Buchtel College students worked so hard to achieve.