Synthetic polymers are found in a large array of products that have resulted in improved living conditions and better health.  The physical and mechanical properties that make a synthetic polymer suitable for a particular application depend on the size, chemical composition, end groups, and architecture of the polymer.  Our group uses established and new MS methods to determine the latter, chemical features, whose knowledge is essential for correlating polymer structure to specific properties and functions.

Single-stage (one-dimensional) mass spectrometry provides the accurate masses of the constituents of a polymer or copolymer, from which the corresponding compositions can be deduced with unsurpassed sensitivity, specificity, and speed.   As a dispersive method, MS is ideally suited for the identification of the minor synthetic products and degradation products of polymer synthesis, which are difficult to detect by integrative methods, such as IR or NMR spectroscopy.  Our group uses MALDI, ESI, and APCI mass spectrometry for the complete analysis of new synthetic polymers and materials; the minor and/or degradation products detected by MS are crucial for establishing polymerization mechanisms, confirming the origin of unknown samples, and comparing products prepared in different batches or by different methods.

Blends of differently sized polymers can be separated into their components or into narrower molecular weight mixtures by gel permeation chromatography (GPC).  This liquid chromatography (LC) method separates based on hydrodynamic volume.  On the other hand, interactive LC disperses on the basis of chemical composition, functionality, and mass.  Our group investigates interactive LC for the analysis of copolymers and derivatized polymers that contain components of different polarities.  For example, we recently found that reverse-phase LC of poly(ethylene glycol) / poly(propylene glycol) (PEG / PPG) copolymers can be optimized to yield fractions with constant (or very narrow) PPG content, as illustrated in Figure 1. 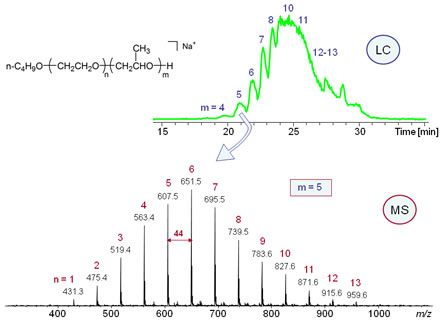 In tandem (MS/MS) or multistage (MSn) mass spectrometry, a specific precursor ion is mass-selected and induced to decompose into structurally indicative fragments, which are identified in a subsequent mass-analysis step.  A series of studies in our group focuses on the acquisition, interpretation, and classification of the MS/MS and MSn mass spectra of synthetic polymers.  Knowledge of the fragmentation mechanisms of polymer ions is the first step in the development of MS/MS and MSn strategies for the characterization of polymer sequences and architectures. We recently elucidated the fragmentation pathways of polystyrenes and polyacrylates and developed a protocol for the determination of branched architectures (Figure 2). 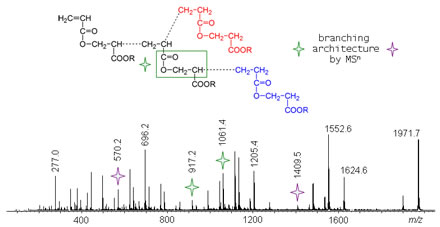 Precursor ions are induced to decompose by collisionally activated dissociation, CAD, or electron transfer dissociation, ETD.  The former can be applied to singly as well as multiply charged precursor ions, whereas the latter is only applicable to ions with more than one charge.  ETD is widely used in peptide sequencing.  Current research in our group tests the advantages of ETD vs. CAD for synthetic polymers containing unsaturated functionalities.

Considerable research efforts are devoted to the development of selective degradation / mass spectrometry techniques for the characterization of polymers that are not analyzable directly by MS or other spectroscopic means.  Mild thermal degradation is employed to cleave large or complex polymer systems to smaller oligomers, which can subsequently be identified by MS and MSn, to thereby gain structural data about the original polymer.  With (co)polymers containing biodegradable constituents, enzymatic digestion provides a means to cleave selectively the biodegradable components.  The mass spectra obtained from the degradation products provide valuable structural insight about the composition of large polymer networks or complex formulations, which are very challenging to characterize otherwise.

In IM/MS, ions travel through a drift cell pressurized with a carrier gas.  The drift time through this cell depends on the mass, charge, and shape of the ions.  Hence, it allows one to differentiate isomeric or isobaric compositions with different geometries.  IM/MS is a powerful method for the analysis of protein conformations.  Our group explores its power to simplify the complexity of polymer mass spectra, to identify minor impurities and byproducts which are often buried under the signals produced from the major polymer components, and to distinguish (co)polymer isomers and isobars.  Figure 3 shows the distributions of drift times vs. mass-to-charge ratios of the ions formed upon ESI of a pegylated sorbitan trioleate.  The spectra within the slice at m/z ~1,000 indicate the presence of singly and doubly charged oligomers with significantly different drift times (and, hence, geometries).  Such separation allows for definitive identification of the surfactant's components, even the minor ones, which is impossible from the simple mass spectrum alone. 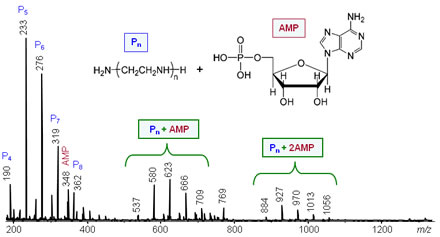 Synthetic polymers are widely used for biomedical purposes, for example, in the manufacture of stents and implants, drug delivery systems, biosensors, and corrective devices.  Biomolecules can adhere on the surface of such polymers by adsorption and adsorbed biomolecules can affect the biocompatibility and in vivo performance of the polymer hosts.  Our group exposes polymers engineered for biomedical use to biological solutions and characterizes the adsorbed biopolymers either by extracting them from the surfaces and analyzing them by MSn and LC/MSn methods, or by direct surface MALDI imaging techniques.  In control studies, the adsorption of single biomolecules, biopolymers, or analogs is investigated.  These studies aim at assessing the biocompatibility of the new materials and also reveal fundamental information about the guest-host interactions that can develop in these assemblies (Figure 4).

Our group is an active participant in the Integrated Biosciences Program, an interdisciplinary combination of integrative biology, biochemistry, bioinformatics, and bioengineering.  In synergistic research with groups in the Departments of Biology and Polymer Science, we employ mass spectrometry methods for the characterization of proteins, lipids, and their glycoconjugates.  Ongoing investigations aim at the identification of the proteins present in gecko foot pads using comparative proteomics approaches.  Concurrent work explores new mass spectrometry methods for the analysis of peptide sequences and glycolipid structures and examines fundamental aspects of the tandem mass spectrometry characteristics of such biopolymers. 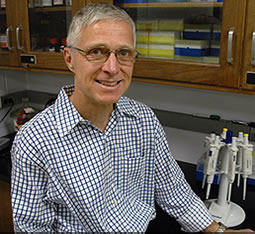