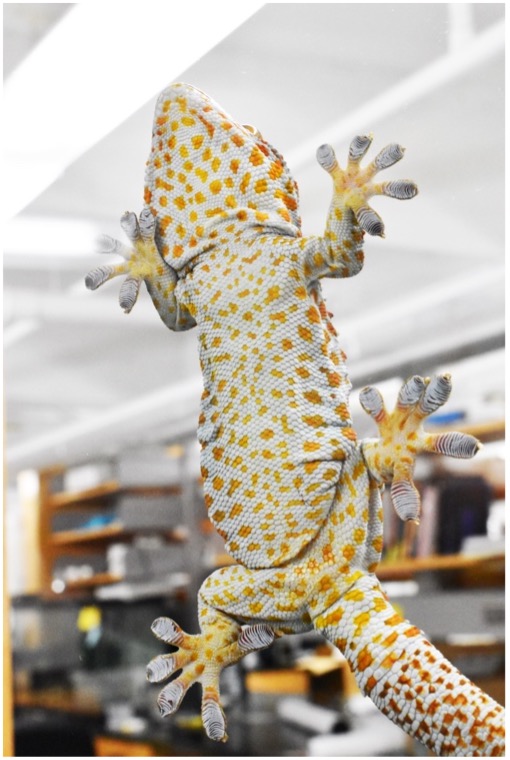 Geckos have captured our imagination for many decades due to their innate ability to run up vertical surfaces and even hang upside down on ceilings. It was pointed out almost 20 years ago the role of weak van der Waals interactions (relatively weak forces that attract neutral molecules to one another) in achieving this remarkable aptitude to walk on vertical surfaces. The tiny hair-like structures used to create intimate contact to increase van der Waals interactions has inspired new adhesives for applications in many areas including robotics and manufacturing.

The recent work, “Direct evidence of acid-base interactions in gecko adhesion,” has addressed the confounding evidence that has been difficult to explain since the discovery of van der Waals forces controlling adhesion. For example, geckos stick much stronger on clean glass surfaces and sometimes can result in damaging their setae. Also, geckos leave behind a trace of lipid residue. Lipids are fat-like organic molecules that have a long non-polar tail and a polar headgroup.

Researchers Saranshu Singla, Dharamdeep Jain, Chelsea Zoltowski, Sriharsha Voleti, Alyssa Stark, Peter Niewiarowski, and Ali Dhinojwala have shown that there are more than just van der Waals interactions holding these geckos on glass-like surfaces. In particular, they directly measured these interactions by placing the gecko toe sheds in contact with a sapphire substrate using a tool that is sensitive to the chemical structure of the contact interface. They show direct evidence of the involvement of hydrogen-bonding between the polar lipid headgroups and the sapphire substrate, changing the way we think about the organization of lipids on the outer surface of the setae and also gecko adhesion. By removing the lipid layer from the toe sheds, they showed that the lipids play a major role in preventing wear and damage to setae during detachment, thereby enabling geckos to use their setae repeatedly for a period of few months.

This work has helped in resolving some of the fundamental issues in explaining gecko adhesion and will spark new approaches to design stronger adhesives that can also potentially self-clean for adhesive bandages, skin sensors for personalized healthcare, and pick and drop applications.