Eyes of an engineer:
Student discovers world of opportunity in UA, and in himself

It’s the ability to “see beyond the surface of something,” to perceive the full depth and breadth of “its greater implications,” says Gregory Brown, a junior chemical engineering major at The University of Akron (UA).

Of all that he has gained at the University, it is this vision – this intuition of the profound potential within himself, as much as within the raw materials of the laboratory – that has most transformed his experience of the world.

Gregory Brown, a chemical engineering major, applies classroom learning at Goodyear Tire & Rubber Co., where he co-ops. “People think of UA as a good school, but they don’t realize how great of a school it is,” he says. “I’m in my third co-op rotation with Goodyear … and I’m doing actual research projects on materials that many students don’t get to work with.”

For, despite being a Williams Honors Scholar, president of the Honors Delegates, member of the Dean’s Team, and recipient of numerous scholarships and awards, Brown says he often doubted his achievements, feeling himself to be an “imposter.”

“I felt like it was never enough,” he says. “I was unable to acknowledge the good things I had done. I wondered, am I actually a smart person? Or am I a fraud?”

The doubt first crept into his mind when, at Archbishop Hoban High School in Akron, he struggled to achieve the ACT score he desired – despite his excellent performance in Honors and AP courses in math and science. The young man who, as a child, had a penchant for fixing things – whether universal remotes or bicycles – felt as if he could not fix some malfunction within himself.

For the design was always clear in his mind, the specifications exact: He would settle for nothing less than perfection.

“I was very intense my freshman year [of college],” he says, recalling the many hours he spent with his head buried in books, his vision narrowing in on sentence after sentence, word after word. Read, remember, repeat.

In class, he recalls, it was the same routine. Concept after concept. One building block after another – but no sight of the building itself.

It all began to seem meaningless.

“It seemed like we were just doing things – like there wasn’t a reason,” he says. “I always thought there is a reason to know everything, it’s just a matter of finding the correct implementation for things. But I couldn’t see it at the time.”

Brown lost sight of himself as well, succumbing to doubts about whether he wanted to be an engineer – feeling a “caged sensation of being trapped within [his] greatest ability.”

“The very thing that gave me purpose,” he says, “that I was so good at, was the one thing I just didn’t want to do anymore. I saw no purpose in it. I wondered, does what I do even matter? Is it even appreciated?”

The natural inquisitiveness that he says was the “driving force” that carried him to the University had begun to “dry up” like a heat-baked stream.

But then, in his Transport Phenomena course – while studying multidimensional fluid flow – a fresh spring burst to the surface.

“The intricacy and beauty of what we do came out from subliminal straits,” he says, and “bloomed before my eyes,” a flower born of “the marriage of theory and practice.”

He saw the interrelations of all those concepts which, like building blocks, now fell into place, their real-world application made clear. A new set of eyes opened.

“I could walk into any room and ‘see’ it,” he says. “I like to call it engineering vision. You walk into a room, and you don’t just see a room, you see all of the materials it’s constructed out of, the loads borne by the materials, the forces involved all across the room.

“You notice a chair, and you think of its specifications, the wood it’s made out of, the strength of the wood, where the wood comes from, its cost and availability, whether to use a strong wood that is more expensive or a cheaper wood that is more abundant.”

It is precisely this vision – this ability to see the “greater implications” or “big picture” of engineering – that the College of Engineering cultivates in its students, says Dr. Craig Menzemer, interim dean of the college.

“The experiential learning opportunities we offer are vital to students understanding the ‘big picture’ of engineering,” he says. “Things ‘click’ when they are able to apply, for example, their work in statics and mechanics to developing simulations that predict the behavior of structures before they are actually built. I’ve been witness to many ‘lightbulb moments’ here at UA.”

With fresh eyes, Brown looked upon the University as a landscape of new opportunities.

“People think of UA as a good school, but they don’t realize how great of a school it is,” he says. “I’m in my third co-op rotation with Goodyear … and I’m doing actual research projects on materials that many students don’t get to work with.”

In addition to working with The Goodyear Tire & Rubber Co., Brown continues to work with Dr. Bryan Vogt, professor of polymer engineering, on a project that he began as a freshman, as part of the College of Polymer Science and Polymer Engineering’s Research Experience for Undergraduates summer internship program, and which will culminate in his Honors Research Project. Brown is seeking to understand how the architecture of plastics affects their aging.

Brown’s success in the lab, Vogt says, is owing precisely to his intellectual curiosity – that “driving force” within the best engineers.

“He wants, rather needs, to understand the ‘why’ associated with any topic that he is studying,” Vogt says. “‘Why’ is the question of children and exceptional engineers. He is inquisitive and intellectually curious (and still has a copy of my graduate-level thermodynamics book that he wanted to read).”

Indeed, Dr. John Huss, interim dean of the WHC and professor of philosophy, adds that that “willingness to go beyond classroom learning, and to follow [one’s] curiosity and creative drive wherever it may lead,” is characteristic of Williams Scholars.

The freedom to pursue that “creative drive” where it led him, Brown says, was made possible by the WHC’s first-priority registration policy, which allowed him to register for classes early, and thereby take classes with professors of his choice.

“That is a lot of what contributed to my academic success here,” he says. “Those relationships with professors really encouraged me to shoot further for the things I want.”

But that broad vista of opportunities, which opened up on campus, would have remained invisible and inaccessible if a similar vista – an enlarged vision of his own potential – had not first opened within himself.

“I realized, this is who I am,” Brown says, recalling the moment he dispelled his doubts about being an engineer. “This is me. It’s preposterous for me to not want to follow through with that.”

Now, Brown looks to the future with a sense of inner trust.

“I think I’ve put myself into a position where … I feel like I could do anything,” he says, adding that, whether he chooses graduate school or industrial employment after graduation in May 2020, he trusts that that “driving force” – fluidlike or “laminar,” he says – will carry him along.

“I’ve gone with the flow so far,” he says, “and I’m just hoping it remains laminar.”

In our College of Engineering, you can choose from five areas of study and contribute to teams that build race cars, rockets, and biomedical devices that improve life. 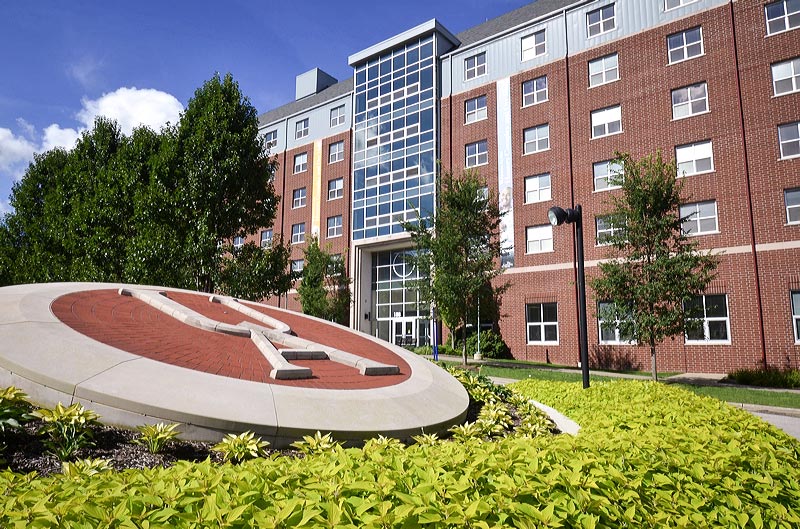 Students in our prestigious Williams Honors College live in the Honors Residence Hall with other high-achieving, self-motivated students. They can apply for additional scholarships, and gain leadership experience through student organizations and through the Honors Leadership Summit. Further, students in the Williams Honors College design their own research focus, and get personal attention from faculty advisers.