When it comes to earning a college degree, the greatest obstacle can be funding.

For this reason, The University of Akron is pleased for the opportunity each year to assist talented, deserving students achieve their dreams, thanks to more than 1,300 named scholarships established through the kindness and generosity of thousands of UA alumni and friends, corporations, and foundations.

Scholarships truly are the best way to ensure that today’s students persist to graduation. Scholarships allow students to enroll full time and remain focused on their studies; they also reduce drop-out rates, decrease the stress of student loans, and shorten the road to graduation.

The need for scholarships grows each year, however, as students continue to face an increased financial burden in pursuit of a college degree. In fact, 94 percent of today’s baccalaureate students borrow to pay for college – versus just 45 percent in 1993. Across the country, the average college-related debt for borrowers in the class of 2016 was $37,172; for Ohio students, that figure was $30,239.

If you are interested in making a significant contribution to student success, please consider a gift to the MAKING A DIFFERENCE AND MOVING FORWARD scholarship campaign, which is the University's most important initiative. You may also establish a named scholarship at The University of Akron, which can be created to honor a living person, in memory of a loved one, or to contribute to the growth of an area of study.

How do I apply for a scholarship?

This is not the page to apply for scholarships.

Students who want to apply for scholarships should visit the scholarship page on the Financial Aid site.

The Department of Development does not accept applications for or distribute scholarships. Scholarships are distributed through the University’s Office of Student Financial Aid. 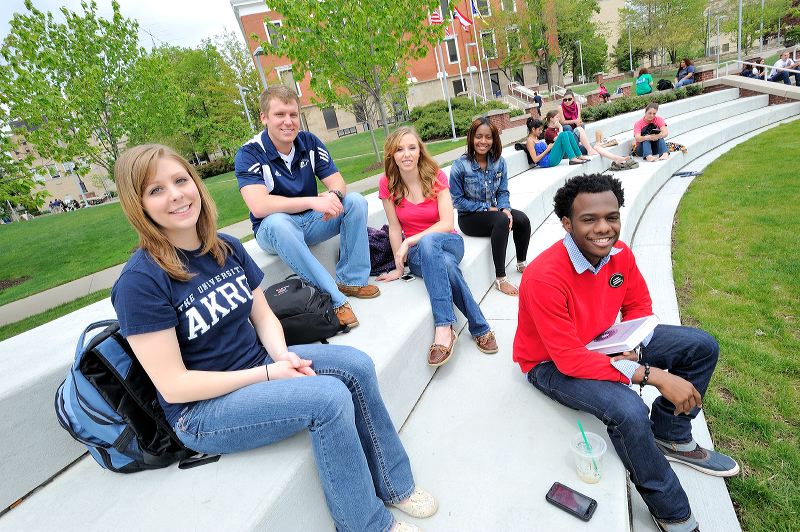 Search for a Named Scholarship

The Norman H. Green Endowed Scholarship in Civil Engineering was established at The University of Akron in 2019 by Mr. Green in celebration of the 100TH Anniversary of Gamma Alpha Zeta, the local chapter of Lambda Chi Alpha Fraternity, where he shared his time and developed friendships as a dedicated fraternity brother. The scholarship also demonstrates Mr. Green’s appreciation for the education and social opportunities he received as a University of Akron student.

In 1953, Mr. Green earned his Bachelor of Science Civil Engineering degree in the five-year cooperative program from The University of Akron. He later became a Registered Engineer in the State of Ohio.  As a UA student, Mr. Green served as vice president of Student Council, vice president of his senior class, and was selected as a Member of Omicron Delta Kappa Honorary.  After graduation, with an ROTC Commission, Mr. Green served as 1st Lieutenant in The United States Air Force and was stationed in Germany for two years.

Mr. Green began his engineering career working for the Firestone Tire and Rubber Co. before embarking on a more than 50-year career in 1958 with Akron’s Burger Iron Company, which fabricated and erected the structural steel for many of the buildings on campus. At Burger Iron, where Mr. Green had served part of his co-operative education, he began as a Sales/Project Manager Engineer, and later held positions as Chief Engineer, Vice President, President, CEO, and Chairman of the Board.

Mr. Green met Mary Leyden ’51 on campus through intra-fraternity/sorority events and they married in 1954. Their marriage spanned 59 years prior to Mary’s passing in 2013. To honor her memory, Mr. Green established The Mary E. Leyden Green Memorial Scholarship in 2015.  They have been blessed with six children and 11 grandchildren.  Norm and Mary’s legacies continue at the University through their children and grandchildren, two of whom have received bachelor degrees from The College of Engineering, two have received advanced degrees and three are currently attending the University.

The Norman H. Green Endowed Scholarship in Civil Engineering continues Mr. Green’s legacy and his long-standing commitment to both his alma mater and his fraternity. The University honored him with Distinguished Engineering Alumni Award in 1997, and the fraternity bestowed the Lambda Chi Alpha fraternity Outstanding Alumni Award to him in 1981.

The Norman H. Green Endowed Scholarship in Civil Engineering shall be awarded to an engineering student(s) at The University of Akron using the following preferences as ordered:

Additionally, students must demonstrate a strong work ethic, outstanding leadership and involvement in student activities, and have a 3.0 or higher accumulative grade point average.  First consideration for this scholarship will be given to students demonstrating financial need.  Selection of the recipient(s) will be made by the College of Engineering, and the scholarship may be renewable provided the recipient continues to meet the above criteria.